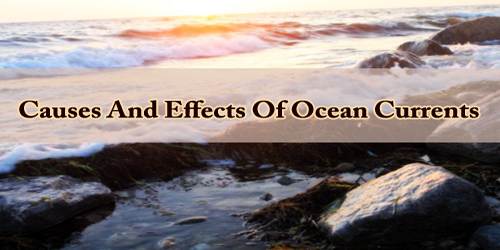 Causes And Effects Of Ocean Currents

Ocean Currents are the movements of ocean water due to gravity, the rotating earth (Coriolis Effect), water density, the sun, and wind. The various forces determine the size, speed direction, and shape of ocean currents. The water can either move horizontally known as currents or vertically known as downwellings or upwellings.

Much larger currents are at work in our oceans, circulating water around the world. These ocean currents, which are massive currents that are influenced by a variety of different forces that act to propel the water both on the surface and in deep ocean waters. This movement has a significant effect on the earth’s weather. For example, the Gulf Stream current carries warm water toward northern Europe. Due to this, coastal countries in northern Europe have a milder winter than coastal areas in the northeast United States that are much farther south.

In cold regions, such as the North Atlantic Ocean, ocean water loses heat to the atmosphere and becomes cold and dense. When ocean water freezes, forming sea ice, salt is left behind causing surrounding seawater to become saltier and denser. Dense-cold-salty water sinks to the ocean bottom. Surface water flows in to replace the sinking water, which in turn becomes cold and salty enough to sink. This “starts” the global conveyer belt, a connected system of deep and surface currents that circulate around the globe on a 1000 year time span. This global set of ocean currents is a critical part of Earth’s climate system as well as the ocean nutrient and carbon dioxide cycles.

The general circulation is governed by the equation of motion, one of the fundamental laws of mechanics developed by English physicist and mathematician Sir Isaac Newton that was applied to a continuous volume of water. This equation states that the product of mass and current acceleration equals the vector sum of all forces that act on the mass. Besides gravity, the most important forces that cause and affect ocean currents are horizontal pressure-gradient forces, Coriolis forces, and frictional forces. Temporal and inertial terms are generally of secondary importance to the general flow, though they become important for transient features such as meanders and eddies.

Gravity – Gravity tends to pull items towards the surface of the earth. When the wind blows ocean water, the water piles up in the direction of the wind. Gravity, therefore, pulls the water down the ‘hill’ against the pressure gradient.

The salinity of the water – When water moves towards the poles, it gets cold and freezes into ice, leaving a share of salt behind. It makes the underlying water saltier, making it denser. The cold, saltier and denser water sinks to the floor of the ocean and is replaced by surface water in the process.

Coriolis Effect – Earth’s rotation about its axis causes moving particles to behave in a way that can only be understood by adding a rotational dependent force. To an observer in space, a moving body would continue to move in a straight line unless the motions were acted upon by some other force. To an Earth-bound observer, however, this motion cannot be along a straight line because the reference frame is the rotating Earth. This is similar to the effect that would be experienced by an observer standing on a large turntable if an object moved over the turntable in a straight line relative to the “outside” world. An apparent deflection of the path of the moving object would be seen. If the turntable rotated counterclockwise, the apparent deflection would be to the right of the direction of the moving object, relative to the observer fixed on the turntable.

This remarkable effect is evident in the behavior of ocean currents. It is called the Coriolis force, named after Gustave-Gaspard Coriolis, a 19th-century French engineer and mathematician. For Earth, horizontal deflections due to the rotational induced Coriolis force act on particles moving in any horizontal direction. There also are apparent vertical forces, but these are of minor importance to ocean currents. Because Earth rotates from west to east about its axis, an observer in the Northern Hemisphere would notice a deflection of a moving body toward the right. In the Southern Hemisphere, this deflection would be toward the left. As a result, ocean currents move clockwise (anticyclonically) in the Northern Hemisphere and counterclockwise (cyclonically) in the Southern Hemisphere; Coriolis force deflects them about 45° from the wind direction, and at the Equator, there would be no apparent horizontal deflection.

More specifically, ocean currents influence the temperature of the regions through which they travel. For example, warm currents traveling along more temperate coasts increase the temperature of the area by warming the sea breezes that blow over them. Perhaps the most striking example is the Gulf Stream, which makes northwest Europe much more temperate than any other region at the same latitude. Another example is Lima, Peru, where the climate is cooler, being sub-tropical than the tropical latitudes in which the area is located, due to the effect of the Humboldt Current.

They result in the rain – Warm currents lead to evaporation, which turns into the rain for the coastal areas. For instance, North Atlantic Drift brings rainfall to Western parts of Europe that results in rains throughout the year.

They can also cause deserts – Cold currents do not give rise to moisture-laden winds and, therefore, there is no rainfall in the coastal regions. The conditions cause desertification in the affected coastal regions, such as the Kalahari and Patagonia Deserts because of the cold Benguela and Falkland currents, respectively.

They can destroy marine wildlife – Some currents might be too strong and end up destroying planktons. For instance, El Nino currently destroys planktons along the Peruvian coasts. It also brings with it several diseases that kill fish.

They help with the continuity of life – In Antarctica, strong upwelling currents pump nitrogen and phosphates up from the deep sea to blooms of algae and other plants. The planktons are eaten by crustaceans called krill. The krill in turn feed penguins, seabirds, seals, and the baleen whales the largest animals on earth.

They save up on time and costs – It goes to the advanced knowledge of currents by sailors. When currents are in their favor, they can reach their destinations in time. They can also rescue shipping time and fuel costs.

However, if they are against the sailors, they might make tore time battling the currents, and use more fuel to sail past those currents

They can result in deaths – Ocean currents can also result in deaths and destruction of property if they are strong enough to overpower ships in the ocean. Of course, to do so, they have to be very strong and probably accompanied by tremors or lightning, but in the end, they can lead to disastrous results.

Ocean currents are an important abiotic factor that significantly influences food webs and reproduction of marine organisms and the marine ecosystems that they inhabit. Many species with limited mobility are dependent on this “liquid wind” to bring food and nutrients to them and to distribute larvae and reproductive cells. Even fish and mammals living in the ocean may have their destinations and food supply affected by currents.

Upwelling currents bring cold nutrient-rich waters from the ocean bottom to the surface, supporting many of the most important fisheries and ecosystems in the world. These currents support the growth of phytoplankton and seaweed which provide the energy base for consumers higher in the food chain, including fish, marine mammals, and humans.