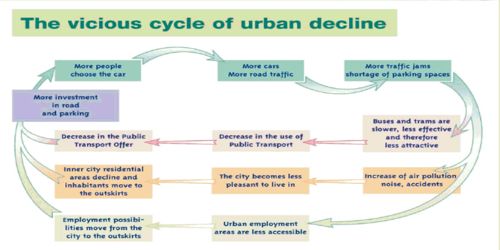 It is an increasing concentration of the population in cities and a transformation of land use and society to a metropolitan pattern of organization. Natural increase is fuelled by improved food supplies, better sanitation, and advances in medical care that reduce death rates and cause populations to grow both within cities and in the rural areas around them. Immigration is the second reason why population grows, and it is the largest source of its growth.

Immigration Push Factors – The “surplus” population is forced to migrate to cities in search for jobs, food, and housing. In some places, economic forces or political, racial, or religious conflicts drive people out of their homes. The UN estimated that in 2010 at least 15.9 million people fled their native country and that another 11.6 million were internal refugees within their own country, displaced by political, economic, or social instability.

Immigration Pull Factors – Even in the most chaotic cities, people are there by choice, attracted by the excitement, vitality, and opportunity to meet others like themselves. The most important thing to them is that cities offer jobs, housing, entertainment, and freedom from the constraints of village traditions. Possibilities exist in the city for upward social mobility, prestige, and power not available in the country.

The reasons for the growth of urban areas include:

There are many problems associated with the rapid growth. These include unplanned housing (squatter settlements/shanty towns), dealing with urban waste, pollution and stress on the infrastructure and the city’s services.

The provision of water and sanitation services to growing urban settlements, peri-urban and slum areas presents critical challenges. The increased demand for water from the growing population can place added stress on already stretched resources. In and around cities, water is commonly in short supply and subject to increasing competition by different users. Urban growth leads to increasing demand for water for industrial and domestic use, which conflicts with agricultural demands.

Cities of the Future:

An alternative to spreading the population across a wide area of countryside is to build upward. This model, which depends strongly on technology. They have been called the technopolis, vertical city, or city of the future. The central hub of most big American cities now is dominated by skyscrapers and a highly technological environment. The emerging supercities of the Developing World are also moving toward this style, in part because of its association with wealth, power, and progress

Canada is an Urban nation with 80% of our population living in Urban areas.