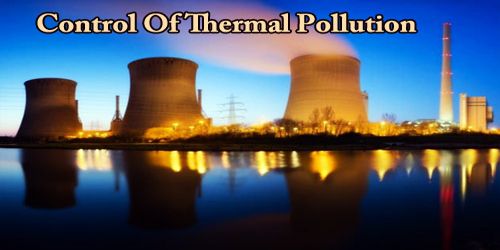 Thermal pollution also called “thermal enrichment”, is a real and persistent problem in our modern society. In layman’s terms, thermal pollution is when an industry or other human-made organization takes in water from a natural source and either cools it down or heats it up. They then eject that water back into the natural resource, which changes the oxygen levels and can have disastrous effects on local ecosystems and communities.

Many human and natural factors contribute to the problem of thermal pollution. The single biggest cause of thermal pollution is probably cooling for industrial machinery and power plants. Water is an excellent, and free, cooling agent. This is why many industrial operations pull in relatively cool water to cool their machinery and let the relatively warm water flow back into the river or lake or sea.

Other causes of thermal pollution include soil erosion. This will elevate water and expose it to sunlight. When the water used as a coolant is returned to the natural environment at a higher temperature, the sudden change in temperature decreases oxygen supply and affects ecosystem composition. Fish and other organisms adapted to a particular temperature range can be killed by an abrupt change in water temperature (either a rapid increase or decrease) known as “thermal shock.”

However, thermal pollution can be beneficial to some species. Bacteria and algae tend to benefit from excess heat. Some larger animals also benefit from the warmer water. In Florida, manatees spend the winter near power plants, where the cooling water they use warms up the shallow saltwater.  On balance, thermal pollution is a negative force for many reasons.

Control of thermal pollution is necessary as its detrimental effects on the aquatic ecosystem may be detrimental in the future. Viable solutions to chronic ther­mal discharge into water bodies are as follows:

In the United States, about 75 to 82 percent of thermal pollution is generated by power plants. The remainder is from industrial sources such as petroleum refineries, pulp, and paper mills, chemical plants, steel mills, and smelters. Heated water from these sources may be controlled with:

Some facilities use once-through cooling (OTC) systems which do not reduce the temperature as effectively as the above systems. For example, the Potrero Generating Station in San Francisco (closed in 2011), used OTC and discharged water to San Francisco Bay approximately 10 °C (20 °F) above the ambient bay temperature.

Urban runoff – During warm weather, urban runoff can have significant thermal impacts on small streams, as stormwater passes over hot parking lots, roads, and sidewalks. Stormwater management facilities that absorb runoff or direct it into groundwater, such as bioretention systems and infiltration basins, reduce these thermal effects. These related systems for managing runoff are components of an expanding urban design approach commonly called green infrastructure.

Retention basins (stormwater ponds) tend to be less effective at reducing runoff temperature, as the water may be heated by the sun before being discharged to a receiving stream.

Some of the potential physical applications for thermal discharge (rejected heat) of power plants are:

Most of these potential physical applications are of colder regions or locations.