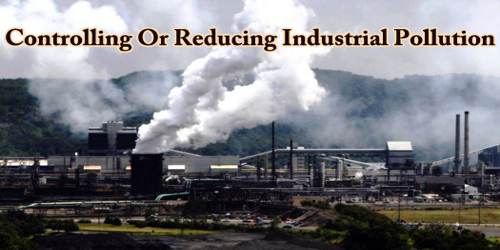 Any form of pollution that can trace its immediate source to industrial practices is known as industrial pollution. Most of the pollution on the planet can be traced back to industries of some kind. In fact, the issue of industrial pollution has taken on grave importance for agencies trying to fight against environmental degradation. Countries facing sudden and rapid growth of such industries are finding it to be a serious problem which has to be brought under control immediately.

The effects of industrial pollution are vast, causing water contamination, a release of toxins into the soil and the air, and it is the cause of some of the most significant environmental disasters of all time.

As the harmful effects of industrial pollution increase, there are many agencies and individuals who are working to reduce carbon footprints and live and work eco-friendlier. Here are some of the different steps being taken to reduce and eliminate pollution:

Other Ways to Control or Reduce Industrial Pollution –

Here are some of the ways companies are working to reduce industrial pollution:

Selection of industry site – This is a very important factor considering the environment around the factory. Putting more consideration into where new sites are located, and the potential impact of the environment surrounding it can help reduce harmful consequences.

Plantation- Need to plant and grow more trees as these act as buffers and natural purifiers for the environment.

Stringent Government Action – Government agencies such as the Environmental Protection Agency must be allowed to take stringent action against defaulters and corporations that flout the rules laid down by such agencies.

Regular Environmental Impact Assessments – Being a responsible company or industry should require regular environmental impact assessments that are reported for evaluation. If there are harmful impacts discovered during the review, actions to correct the negative consequences should be developed and enforced.

Developed nations are the ones that are most affected by industrial pollution. And developing nations in the name of progress are not far behind. But as more stringent rules are brought about the industrialized nations are outsourcing their manufacturing units to lesser developed countries that have more lenient environmental laws. This will cause the already delicate ecosystems in these areas to be affected; Not only the environment but also the people. Planned production and growth should be maintained for a balance between man’s progress and nature’s sustainance.