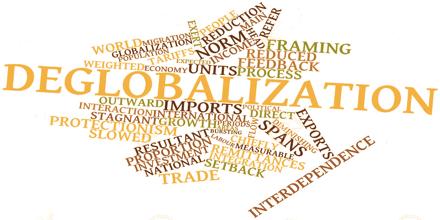 Deglobalization is the process of reversing or decreasing interdependence and integration among the countries. It stands in contrast to globalization, in which units become increasingly integrated over time, and generally spans the time between periods of globalization. It has derived from some of the very profound change in many developed nations, where trade as a proportion of total economic activity went down between 1914 and 1970s. Deglobalization has also been used as a political agenda item or a term in framing the debate on a new World economic order.