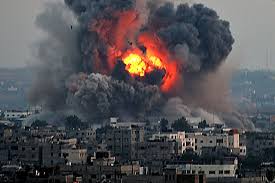 Difine on A point on Gaza

As the Israel’s insulting on Gaza goes on with the killing of innocent people and children who have nothing to do. Israel claims rocketing its cities by Hamas, this is in no doubt a war crime and crime against humanity of unexplained proportion. Lot of people in the world and lot of countries are against this war.But Israel continuously attack the Gaza people who are innocent. United Nation  are also against this war but Israel don’t care anything. That is a unparalleled example of any observance of the terms of agreement through the Muslims, as well as Islamic history will show quite a few examples of the similar nature.