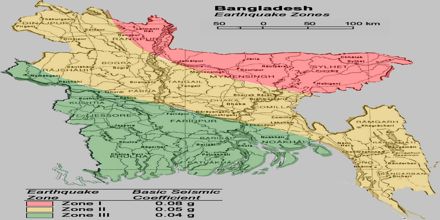 A major earthquake can devastate any populated area. Imagine that earthquake in an enormous, densely populated city where most structures are poorly built on soft soil. A city already threatened by floods, sea level rise and shifting river channels. These are the very real dangers facing Dhaka, the capital of Bangladesh. Large earthquakes are part of the region’s history, but are much less frequent than floods. Most people in Dhaka have not experienced a major earthquake and the city is unprepared for such a disaster.

A major earthquake can destroy any town. Imagine the damage it could do to a huge city, where millions of people live in poorly made buildings. Now imagine this city is also threatened by natural hazards like flooding and rising sea levels. These are the dangers that face Dhaka, the capital of Bangladesh. Scientists predict a major earthquake in the region. It’s been more than 100 years since the last one so Dhaka is not prepared.

With more than 13 million people, and an average of 45,000 people per square kilometer, Dhaka is one of the world’s most crowded cities. And it’s expanding quickly. “The city has grown out very fast, like a mushroom,” says Humayun Akhter. Many of these new buildings, bridges, and roads are not built to hold up in earthquakes. The soft, wet delta soil makes them even more vulnerable. An earthquake could also spark a tsunami or cause rivers to overflow, which could flood the city.

Scientists and officials in Bangladesh hope to update and enforce building codes, educate people about how to prepare for earthquakes, and train rescue workers. They also want to prepare surrounding areas, especially near rivers. A major earthquake could shift a river’s course and lead to widespread flooding. The Indian Plate is moving northeast, slowly colliding with the Eurasian Plate. This collision formed the Himalayan Mountains — and they are still rising. There are many active faults along this boundary, such as the enormous Dauki fault that borders northern Bangladesh. Movement along this fault formed the large Shillong Plateau. To the east, the Burmese Plate pushes west against the Indian Plate. As the the India plate subducts beneath the Burmese Plate, rocks fold and buckle to form the hills and valleys of the Burma Arc.

Of course, active faults can also generate huge earthquakes. The devastating 2004 earthquake and tsunami in Sumatra occurred along the boundary between the Indian and Burmese plates. Scientists think that a major earthquake closer to Bangladesh is only a matter of time. 1548: The first recorded earthquake was a terrible one. Sylhet and Chittagong were violently shaken; the earth opened in many places and threw up water and mud of a Sulphurous smell.

1762: The great earthquake of April 2, which raised the coast of Foul island by 2.74m and the northwest coast of Chedua island by 6.71m above sea level and also caused a permanent submergence of 155.40 sq km near Chittagong. The earthquake proved very violent in Dhaka and along the eastern bank of the meghna as far as Chittagong. In Dhaka 500 persons lost their lives, the rivers and jheels were agitated and raised high above their usual levels and when they receded their banks were strewn with dead fish. A large river dried up, a tract of land sank and 200 people with all their cattle were lost. Two volcanoes were said to have opened in the Sitakunda hills.

1865: Terrible shock was felt, during the second earthquake occurred in the winter of 1865, although no serious damage occurred.

1885: Known as the Bengal Earthquake. Occurred on 14 July with 7.0 magnitude and the epicenter was at Manikganj. This event was generally associated with the deep-seated Jamuna Fault.

1897: Known as the Great India Earthquake with a magnitude of 8.7 and epicenter at Shillong Plateau. The great earthquake occurred on 12 June at 5.15 pm, caused serious damage to masonry buildings in Sylhet town where the death toll rose to 545. This was due to the collapse of the masonry buildings. The tremor was felt throughout Bengal, from the south Lushai Hills on the east to Shahbad on the west. In Mymensingh, many public buildings of the district town, including the Justice House, were wrecked and very few of the two-storied brick-built houses belonging to zamindars survived. Heavy damage was done to the bridges on the Dhaka-Mymensingh railway and traffic was suspended for about a fortnight. The river communication of the district was seriously affected (brahmaputra). Loss of life was not great, but loss of property was estimated at five million Rupees. Rajshahi suffered severe shocks, especially on the eastern side, and 15 persons died. In Dhaka damage to property was heavy. In Tippera masonry buildings and old temples suffered a lot and the total damage was estimated at Rs 9,000.

1918: Known as the Srimangal Earthquake. Occurred on 18 July with a magnitude of 7.6 and epicenter at Srimangal, Maulvi Bazar. Intense damage occurred in Srimangal, but in Dhaka only minor effects were observed.

1934: Known as the Bihar-Nepal Earthquake. Occurred on 15 January with a magnitude of 8.3 and the epicenter at Darbhanga of Bihar, India. The earthquake caused great damage in Bihar, Nepal and Uttar Pradesh but did not affect any part of Bangladesh.

Another earthquake occurred on 3 July with a magnitude of 7.1 and the epicenter at Dhubri of Assam, India. The earthquake caused considerable damages in greater Rangpur district of Bangladesh.

1950: Known as the Assam Earthquake. Occurred on 15 August with a magnitude of 8.4 with the epicenter in Assam, India. The tremor was felt throughout Bangladesh but no damage was reported.

1997: Occurred on 22 November in Chittagong with a magnitude of 6.0. It caused minor damage around Chittagong town.

1999: Occurred on 22 July at Maheshkhali Island with the epicenter in the same place, a magnitude of 5.2. Severely felt around Maheshkhali island and the adjoining sea. Houses cracked and in some cases collapsed.