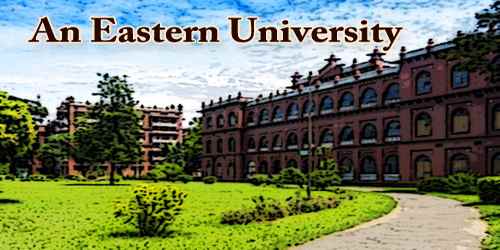 Universities should never be made into mechanical organizations for collecting and distributing knowledge. Through them the people should offer their intellectual hospitality, their wealth of mind to others, and earn their proud right in return to receive gifts from the rest of the world. But in the whole length and breadth of India there is not a single university established in the modern time where a foreign or an Indian student can properly be acquainted with the best products of the Indian mind. For that we have to cross the sea, and knock at the doors of France and Germany. Educational institutions in our country are India’s alms-bowl of knowledge; they lower our intellectual self-respect; they encourage us to make a foolish display of decorations composed of borrowed feathers . . . .

Man’s intellect has a natural pride in its own aristocracy, which is the pride of its -culture. Culture only acknowledges the excellence whose criticism is in its inner perfection, not 1n any external success. When this pride succumbs to some compulsion of necessity or lure of material advantage, it brings humiliation to the intellectual man. Modern India, through her very education, has been made to suffer this humiliation. Once she herself provided her children with a culture which was the product of her own ages of thought and creation. But it has been thrust aside, and we are made to tread the mill of passing examinations, not for learning anything, but for notifying that we are qualified for employments under organizations conducted in English. Our educated community is not a cultured community, but a community of qualified candidates.

Meanwhile, the proportion of possible employments to the number of claimants has gradually been growing narrower, and the consequent disaffection has been widespread, At last, the very authorities who are responsible for this are blaming their victims. Such is the perversity a human nature. It bears its worst grudge against those it has injured . . . .

In the Bengali language there is a modern maxim that can be translated, ‘He who learns to read and write rides in a carriage and pair.’ In English there is a similar proverb, ‘Knowledge is power.’ It is an offer of a prospective bribe to the student, a promise of an ulterior reward which is more important than knowledge itself. . . .

Unfortunately, our very education has been successful in depriving us of our real initiative and our courage of thought. The training we get in our schools has a constant implication in it that it is not for us to produce but to borrow. And we are casting about to borrow our educational plans from European institutions. The trampled plants of Indian corn are dreaming of recouping their harvest from the neighboring wheat fields. To change the figure, we forget that, for proficiency in walking, it is better to train the muscles of our own legs than to strut upon wooden ones of foreign make, although they clatter and cause more surprise at our skill in using them than if they were living and real.

But when we go to borrow help from a foreign neighborhood we overlook the fact . . . that among the Europeans the living spirit of the University is widely spread in their society, their parliament, their literature, and the numerous activities of their corporate life. In all these functions they are in perpetual touch with the great personality of the land which is creative and heroic in its constant acts of self-expression and self-sacrifice. They have their thoughts published in their books as well as through the medium of living men who think those thoughts, and who criticize, compare and disseminate them.

Some at least of the drawbacks of their academic education are redeemed by the living energy of the intellectual personality pervading their social organism. It is like the stagnant reservoir of water which finds its purification in the showers of rain to which it keeps itself open. But, to our misfortune, we have in India all the furniture of the European University except the human teacher…

A most important truth, which we are apt to forget is a teacher can truly teach unless he is still learning himself. A lamp can never light another lamp unless it continues to burn its own flame. The teacher who has come to the end of his subject, who has no living traffic with his knowledge, but merely repeats his lessons to his students, can only load their minds; he cannot quicken them. Truth not only must inform but inspire. If the inspiration dies out, and the information only accumulates, then truth loses its infinity. The greater part of our learning in the schools has been waste because, for most of our teachers, their subjects are like dead specimens of once-living things, with which they have a learned acquaintance, but no communication of life and love.

The educational institution, therefore, which I have in mind has primarily for its object the constant pursuit of truth, from which the imparting of truth naturally follows. It must not be a dead cage in which living minds are fed with food artificially prepared. It should be an open house, in which students and teachers are at one. They must live their complete life together, dominated by a common aspiration for truth and a need of sharing all the delights of culture. In former days the great master-craftsmen had students in their workshops where they co-operated in shaping things to perfection. That was the place where knowledge could become living that knowledge which not only has its substance and law, but its atmosphere subtly informed by a creative personality. For intellectual knowledge also has its aspect of creative art, in which the man who explores truth expresses something which is human in him his enthusiasm, his courage, his sacrifice, his honesty, and his skill. In merely academic teaching we find subjects, but not the man who pursues the subjects; therefore the vital part of education remains incomplete.