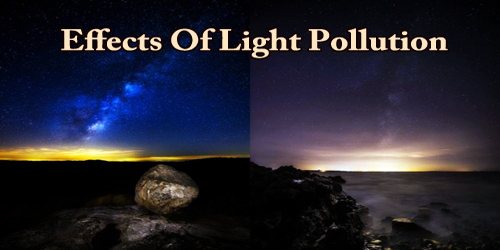 Light pollution, unwanted or excessive artificial light. Like noise pollution, a light pollution is a form of waste energy that can cause adverse effects and degrade environmental quality. Moreover, because light (transmitted as electromagnetic waves) is typically generated by electricity, which itself is usually generated by the combustion of fossil fuels, it can be said that there is a connection between light pollution and air pollution (from fossil-fueled power plant emissions). Control of light pollution, therefore, will help to conserve fuel (and money) and reduce air pollution as well as mitigate the more immediate problems caused by excessive light. Although light pollution may not appear to be as harmful to public health and welfare as pollution of water resources or the atmosphere, it is an environmental quality issue of no small significance.

Light pollution is a side-effect of industrial civilization. Its sources include building exterior and interior lighting, advertising, outdoor area lighting (such as car parks), offices, factories, streetlights, and illuminated sporting venues. It is most severe in highly industrialized, densely populated areas of North America, Europe, and Japan and in major cities in the Middle East and North Africa like Tehran and Cairo, but even relatively small amounts of light can be noticed and create problems. Awareness of the deleterious effects of light pollution began early in the 20th century, but efforts to address effects did not begin until the 1950s. In the 1980s a global dark-sky movement emerged with the founding of the International Dark-Sky Association (IDA). There are now such educational and advocacy organizations in many countries worldwide.

Light pollution adversely affects professional and amateur astronomers, as well as casual observers of the night sky, because it severely reduces the visibility of stars and other celestial objects. While many people choose to dismiss light pollution as being the price of modern life, it has serious effects on everything around it.

Inspection of the area surrounding Madrid reveals that the effects of light pollution caused by a single large conglomeration can be felt up to 100 km (62 mi) away from the center. The global effects of light pollution are also made obvious. The entire area consisting of southern England, Netherlands, Belgium, West Germany, and northern France have a sky brightness of at least two to four times normal. The only places in continental Europe where the sky can attain its natural darkness are in northern Scandinavia and in islands far from the continent.

Light pollution affects the visibility of diffuse sky objects like nebulae and galaxies more than stars, due to their low surface brightness. Most such objects are rendered invisible in heavily light-polluted skies above major cities. A simple method for estimating the darkness of a location is to look for the Milky Way, which from truly dark skies appears bright enough to cast a shadow.

Light pollution can be reduced by using well-designed light fixtures with modern optical controls to direct the light downward and also by using the minimum amount of wattage for the area to be illuminated. National and local government agencies can help by passing and enforcing appropriate light-control laws and ordinances.

There are two basic approaches to solving light pollution – planning and education. Planning means more consideration about how areas are zoned and where lights are placed. It also means changing the types of lights used within the home, signs, and streetlamps to more efficient bulbs, and with a light output that is not so disruptive. Education is also key. The more people understand the importance of turning off lights to conserve energy and reduce light pollution the faster change will be seen.