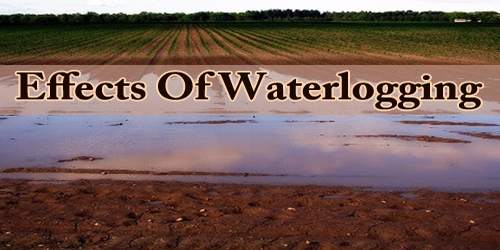 Waterlogging is the saturation of soil with water, either temporarily or permanently. When there is too much water in an area, the soil is unable to absorb the water as it should ordinarily. In extreme cases of prolonged waterlogging, anaerobiosis occurs, the roots of mesophytes suffer, and the subsurface reducing atmosphere leads to such processes as denitrification, methanogenesis, and the reduction of iron and manganese oxides.

Waterlogging constraints plant growth and production in the anaerobic conditions, leading to the death of certain crops and plants. Also, plant roots fail to respire as a result of the excess water in the soil profile, making them weak and either die or fall. It is serious as it does not have to be characterized by excess water on the surface, meaning it could be a continuing problem even without having to see the water on the surface.

In agriculture, various crops need air (specifically, oxygen) to a greater or lesser depth in the soil. Waterlogging of the soil stops air getting in. How near the water table must be to the surface for the ground to be classed as waterlogged, varies with the purpose in view. A crop’s demand for freedom from waterlogging may vary between seasons of the year, as with the growing of rice (Oryza sativa).

In irrigated agricultural land, waterlogging is often accompanied by soil salinity as waterlogged soils prevent leaching of the salts imported by the irrigation water. From a gardening point of view, waterlogging is the process whereby the soil blocks off all water and is so hard it stops air getting in and it stops oxygen from getting in.

The waterlogging may be defined as rendering the soil unproductive and infertile due to excessive moisture and creation of anaerobic conditions. The phenomenon of waterlogging can be best understood with the help of a hydrologic equation, which states that

Here inflow represents that amount of water which enters the subsoil in various processes. It includes seepage from the canals, infiltration of rainwater, percolation from irrigated fields and subsoil flow. Thus although it is loss or us, it represents the amount of water flowing into the soil.

The term outflow represents mainly evaporation from soil, transpiration from plants and underground drainage of the tract. The term storage represents the change in the groundwater reservoir.

About 1.4 million hectares of the 2.04 million affected by waterlogging, suffered from surface water stagnation while 0.64 million hectares had a general rise in the water table, meaning sometimes, the problem is natural, and at times, it is man-made. About 10% of the world’s irrigated lands suffer from waterlogging.

The waterlogging affects the land in various ways. The various after-effects are the following:

Poor Soil Aeration – Waterlogging causes the air within the soil to move out into the atmosphere, replacing it with more water. The inadequate supply of oxygen retards or ceases the growth of a plant as the accumulating carbon dioxide hampers the growth of the plant’s roots.

Poor aeration also facilitates the growth of toxins and other injurious substances. Such saturated soil also reduces microbiological activity which is vital for the formation of plant food.

It Alters the pH of the Soil – In the flooded soils, the pH changes and becomes more acidic. The soil, therefore, decreases in its alkalinity and makes the growth of plants more difficult. The increasingly acidic soil cannot support plant life.

Change in Soil Temperatures – Waterlogging lowers the temperature of the soil. Low temperatures of the moist soil, affect the microorganisms and their activities, subsequently lowering the rate of nitrogen-fixation

Affecting Soil Nutrients – Nitrogen is vital to the soil and waterlogged soils suffer from nitrogen deficiency. The climate created by waterlogging affects not only the nitrogen nutrients but also other minerals such as sulphur, zinc, iron, manganese, phosphorous, and potassium.

Some of the minerals are available in excess causing the toxicity levels in plants to go up, while in others, the minerals cannot survive, and subsequently the plants.

Retard Cultivation – There is difficulty in cultivating in waterlogged soils. All crops fail to survive because of the underlying conditions and as such, crops are adversely affected. Only rice can survive in such an environment.

Accumulation of Harmful Salts – Waterlogging creates an atmosphere which brings toxic salts to the crop root-zone. The accumulating salts also turn the soil more alkaline and hamper the growth of crops.

The Growth of Water-loving Wild Plants – Waterlogging causes wild plants which thrive in waterlogged environments to grow. These weeds effectively kill useful crops and getting rid of them is an extra investment, especially in extreme waterlogged conditions.

The Loss of Cash Crops – Most cash crops cannot survive or be cultivated in waterlogged soils. It, therefore, makes farmers starve and lose out on the cash they would otherwise get from selling their crops. It also forces them to switch to rice, assuming it can grow in such areas.

Effects on Human Health – Waterlogging has an effect on the environment by the fact that it harbors disease vectors like mosquitoes, slugs, and snails. They, in turn, bring illnesses like malaria, bilharzia, typhoid, and others, which affect the human population, animals, and plants, effectively affecting the environment.

The problem of waterlogging develops in its full form slowly. Therefore its early detection is possible by keeping a close watch over the yields and also on the variations in the groundwater level. A comparative reduction in crop yields in spite of irrigation and fertilization and early maturity of crops indicate the symptoms of waterlogging. Also when harmful salts start appearing on the fields as white incrustation or deposit it indicates that waterlogging is likely to follow. In worst cases, the water-table rises so high and close to the ground surface that the fields turn into swamps and marshes.