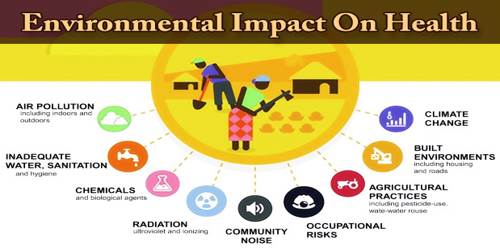 The World Health Organization (WHO) defines the environment, as it relates to health, as “all the physical, chemical, and biological factors external to a person, and all the related behaviors.” Environmental health consists of preventing or controlling disease, injury, and disability related to the interactions between people and their environment.

Some researchers agree that when studying human health it is important to take into account the impact of the environment of the people being studied. That impact can be seen in the fact that health inequalities exist as per geography. In fact, health is impacted by the social and physical environment.

Additional research has also shown that there is a direct relationship between people’s mental health and the prevalence of green spaces; the more proximity to the green space, the better the mental health.

The Healthy People 2020 Environmental Health objectives focus on 6 themes, each of which highlights an element of environmental health:

Creating healthy environments can be complex and relies on continuing research to better understand the effects of exposure to environmental hazards on people’s health.

Consequently, it is difficult to disentangle the exact causes of ill health. Cancers have been linked to tobacco smoke, asbestos, some pesticides, diet, sunlight, pollutants in diesel fumes, heavy metals, and many other carcinogens. Cardiovascular diseases have been blamed on inhalable particles, tobacco smoke, carbon monoxide, and a high-cholesterol diet. Exposure to lead, cadmium, (methyl), mercury, tobacco smoke, and pesticides are all being associated with delayed or abnormal pre and postnatal development. Noise can also have serious health effects.

Some facts and figures illustrate these problems:

Worldwide an estimated 13 million deaths could be prevented each year in a healthier environment. In 23 countries, more than 10% of these deaths are due to just two factors: lack of clean water and the effects of indoor air pollution caused by a high proportion of households that use solid fuel, such as wood, for cooking and heating. Many of these factors have the greatest effect on young children, and without tackling the most important environmental impacts on health, there is little hope of substantial progress towards Millennium Development Goal 4: reducing under-5 child mortality by two-thirds by 2015.

Each country has its own specific profile. In China, for example, the overall picture of 34 healthy years of life lost per 1000 inhabitants is ten times less than many African countries, but the absolute number of deaths due to preventable environmental factors is a staggering 2·34 million people per year. More than 650 000 of those deaths are due to indoor and outdoor pollution alone and could be prevented with a change of indoor cooking methods and adherence to the WHO Air Quality Guidelines of annual mean urban fine particulate matter concentration not exceeding 20 μg/m3.

These data are estimates derived from different sources and reflect the picture in 2004. WHO stresses that they should only serve as a starting point for countries to collect their own data for refinement and validation. In the future, the environment is likely to have an even more important impact on people’s health. If policymakers don’t plan for healthier environments now, many more lives will be lost unnecessarily.

Poor environmental quality has its greatest impact on people whose health status is already at risk. Therefore, environmental health must address the societal and environmental factors that increase the likelihood of exposure and disease.