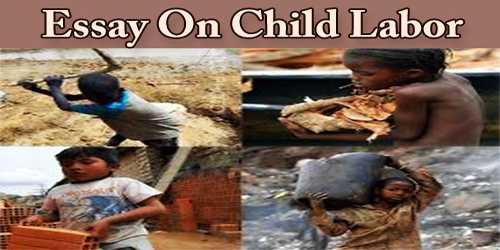 Introduction: Child Labor is common in our country to see young children hawking goods on pavements, at traffic signals, in bus stops and even in front of huge stellar shops. Some of them are hardly ten years old. It is a cognizable criminal offense. It hurts to see children of a tender age waving their stuff in the only hope of making a sale. They are going to believe that money is everything in life. They are at a higher risk to become thieves and criminals. Therefore, child labor could become a source of all evils in society.

The average age for a child to be appropriate to work is considered fifteen years and more. Children falling below this age limit won’t be allowed to indulge in any type of work forcefully. Why is that so? Because child labor takes away the kid’s opportunity of having a normal childhood, a proper education, and physical and mental well-being. In some countries, it is illegal but still, it’s a far way from being completely eradicated.

Meaning of Child Labor: Child Labor involves engaging children to produce goods or services for financial gain. It denies their right to attend regular school and enjoy a happy childhood. It rips their capacity in the bud to have a good future. It affects the overall development of their physical and mental faculties.

When children are involved in full or part-time work, it affects their schooling, recreation and rest. However, any work to promote and develop the child’s capability without affecting these three components is encouraged positively.

Causes of Child Labor: Child labor prevents children from participating in activities such as playing or going to school. It deprives children of normal physical, mental, and emotional development. Child labor also puts children at risk of many harmful situations. In the past child labor was considered normal in many societies. Even though it has been banned internationally, there are still many cases of child labor in the world.

Child Labor happens due to a number of reasons. While some of the reasons may be common in some countries, there are some reasons which are specific in particular areas and regions. When we look at what is causing child labor, we will be able to fight it better.

Firstly, it happens in countries that have a lot of poverty and unemployment. When the families won’t have enough earning, they put the children of the family to work so they can have enough money to survive. Similarly, if the adults of the family are unemployed, the younger ones have to work in their place.

This was a practice when education was not formal in our society. Problems arose when some children had access to education, and others didn’t have due to ignorance or poverty. This inequality became more profound after industrialization. Children, as laborers were easier to control and could be paid less. With the growing number of industries, the demand for labor was high, so the more impoverished families sent their children to work. Apart from pay discrimination, children were allowed in mines and other small places where adults couldn’t go. These kinds of atrocities led to protest against child labor in the late 17th century in Europe and the USA. Moreover, market crashes like great depression resulted in a drastic decrease in demand for labor. In this period, the societies began to support child labor abolishment.

Some families traditionally believe that the next generation should continue their family business. The children of these families are restricted to pursue their own goals in terms of education and career. There are still people who believe that girl children are fit only for domestic chores. So, girls often lose their right to education and normal childhood.

Furthermore, the money-saving attitude of various industries is a major cause of child labor. They hire children because they pay them lesser for the same work as an adult. As children work more than adults and also at fewer wages, they prefer children. They can easily influence and manipulate them. They only see their profit and this is why they engage children in factories.

Lack of Education: Lack of education in rural areas means parents are less educated. Consequently, they also do not value the importance of school and education in the lives of their own children. In the scarcity of contraceptive awareness, couples end up having multiple children. Arranging three meals every day becomes an impossible task and the children learn it the hard way quite soon.

Child Labor a global issue: According to the International labor organization’s 2018 data, there are 152 million child laborers worldwide. This is a global issue and not an isolated problem of a particular nation. But, child labor is more prevalent in developing and underdeveloped countries. As the developed world had faced the wrath of the social evil earlier, they made strict laws and created more awareness in their society. But the effects of industrialization was felt late in the third world. Children make up more than 10 percent of the labor force in the Middle East, Latin America, South Asia, and Africa. These regions are affected by poverty, war, and illiteracy. Faced with extreme poverty and hunger, children are forced to leave their schools and earn money to eat. They toil hard in factories, mines, fields, and in cheap hotels. At times, they are exposed to harmful environmental conditions that affect their health. Their mental wellbeing is impaired irrevocably. Some are too submissive, and some are too angry. They vent out their emotions in a drastic manner like by committing suicides, stealing and murdering. Thus, child labor is one of the root cause problem leading to severe consequences and is detrimental to the development.

Conclusion: Child labor is not just about forcing children to work. Its side effects are quite large and gruesome. It leaves a stain on the child’s mind. It interferes with their mental and emotional health and prevents their proper growth and development. It is a blemish on the face of humanity that must be erased as soon as possible.

In short, the government and people must come together. Employment opportunities must be given to people in abundance so they can earn their livelihood instead of putting their kids to work. The children are the future of our country; we cannot expect them to maintain the economic conditions of their families instead of having a normal childhood.