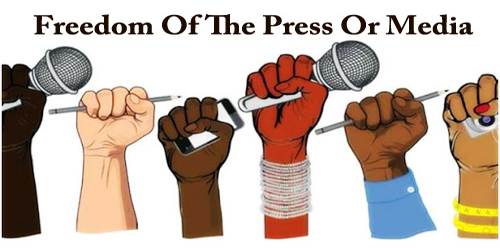 Freedom Of The Press Or Media (Paragraph)

Freedom of the press or freedom of the media is the very foundation of and an essential condition for a successful Democracy. It is the backbone of Democracy. In our country, the freedom of the Press/media has been guaranteed by the Constitution. The Press is supposed to be an active link between the government and the people in a democratic country. It investigates official lapses and makes the facts public. It is, in fact, a watch-dog of democracy. It keeps the government on its toes by exposing its various misdoings and acts as a true mirror of public opinion. The people in a democratic country have a right to know things and this right is a part of the Fundamental Right of Freedom of Speech and Expression. Hence it is the duty of the Press to keep the people informed, educated and alert.

The United Nations’ 1948 Universal Declaration of Human Rights states: “Everyone has the right to freedom of opinion and expression; this right includes freedom to hold opinions without interference, and to seek, receive, and impart information and ideas through any media regardless of frontiers”.

The freedom of the Press does not, however, mean freedom to distort facts, freedom to blackmail people or freedom to indulge in character assassination or cheap sensationalism. The Press is meant to educate public opinion; it is not meant to incite people to senseless violence. The press is not an enemy of the government; it is supposed to help government efforts in creating a healthy climate in society. The press is not there to add to the people’s problems and spell misery and dissatisfaction; it has to work to promote the commonweal.  The Press has to know its responsibilities. It has to ensure that its writings conform to the national objectives and do not run counter to them. Freedom of the press is not construed as an absence of interference or outside entities, such as a government or religious organization, rather as a right for authors to have their works published by other people. This idea was famously summarized by the 20th-century American journalist, A. J. Why, who wrote, “Freedom of the press is guaranteed only to those who own one”. A vigilant, fearless and responsible Press is an important pillar of strength in a democratic setup. The Press must not, therefore, fail in its duty. The government should also not misuse its powers to scuttle the growth of the Press. Self-restraint and self-discipline alone can contribute to the growth of a healthy Democracy in any country.