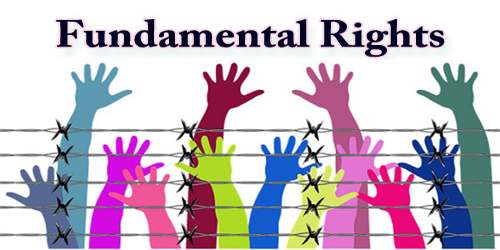 All human beings are born free and equal in dignity and rights. They are endowed with reason and conscience and should act towards one another in a spirit of brotherhood. Everyone is entitled to all the rights and freedoms set forth in this Declaration, without distinction of any kind, such as race, color, sex, language, religion, political or other opinion, national or social origin, property, birth or other status. Furthermore, no distinction shall be made on the basis of the political, jurisdictional or international status of the country or territory to which a person belongs, whether it be independent, trust, non-self-governing or under any other limitation of sovereignty.

Right to due process of law

Right to freedom of movement

Right to freedom of thought

Right to freedom of religion

Right to freedom of expression

Right to freedom of association

Fundamental rights give the citizens dignity of life in an atmosphere of freedom and justice beyond the man-made fetters that had constricted their physical and mental horizons. Modern judiciary is regarded as an excellent product of civilization to put the concept of justice to work in the midst of divergent forces with conflicting class or individual interests. Such conflicts make it difficult to bring about equilibrium in the society for a peaceful and orderly association of citizens for their common good. An independent judiciary and strong democratic institutions are the best guarantee against assaults on the rights of the citizens.

The original interpretation of the United States Bill of Rights was that only the Federal Government was bound by it. In 1835, the U.S. Supreme Court in Barron v Baltimore unanimously ruled that the Bill of Rights did not apply to the states. During post-Civil War Reconstruction, the 14th Amendment was adopted in 1868 to rectify this condition, and to specifically apply the whole of the Constitution to all U.S. states. In 1873, the Supreme Court essentially nullified the key language of the 14th Amendment that guaranteed all “privileges or immunities” to all U.S. citizens, in a series of cases called the Slaughterhouse cases. This decision and others allowed post-emancipation racial discrimination to continue largely unabated.

A vital “protection under the laws” is the right to vote. All people are fundamentally equal, and thus welfare of each person is of equal importance to the society. Inequality is allowed as long as it increases total welfare of the society. Since people tend to be selfish, the only practical way to make the government work for such goals is to make the government democratic, that is ruled (usually indirectly) by the people through voting. Each person must have a right to vote. This fundamental right must be given equally to all people and the government must be controlled (indirectly) through voting. Otherwise, the power would belong to an elite (those who can vote) who can choose to use it for their benefit at others expense. It is essential for the government to improve the country and to serve the people, and thus it is essential not to give the government the power to ignore the people by denying some people the right to vote. Freedom from arbitrary discrimination of interests can only be meaningful if the government must consider one’s interest, and such a requirement can only be achieved through democracy. For efficiency, many powers of the government can be vested in the president; however, the fundamental rights must be preserved and the president must be periodically elected (directly or indirectly) by the people.

The Indian fundamental rights, contrasted with such rights contained in the US bill of rights, present several peculiarities. The fundamental rights in India are far more elaborate than in the United States. Thus, for example, the US bill of rights (first ten amendments) only names some rights. The Supreme Court, through the process of judicial review, decides the limitations on these rights.