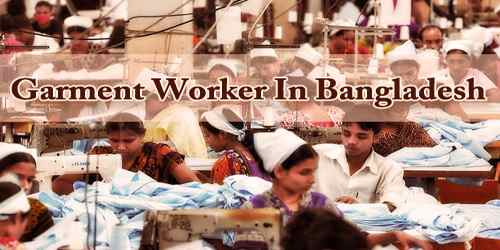 Garments Industry or Ready-made Garments (RMGs) is a major export earner and employment provider in the economy of Bangladesh. It has played an important role in the economic development of Bangladesh in the recent past. Ready-made Garments (RMG) emerged as an industry in Bangladesh in the 1980s. After the 1990s, Bangladesh started moving towards industrialization and the garments industry played a vital role in this revolutionary journey. Today, our GDP’s 80% is covered from this sector. It is the urgency of time to study this field more and more so that we can ensure a healthy and smarter workplace and sustainable RMG sector. Actually, Garment workers are the nucleus of this sector.

Of the millions of wage earning children in Bangladesh in 1990, almost all of them worked in the ready-made garment industry. Based on the Bangladesh Bureau of Statistics Labor Force Survey estimated there were about 5.7 million 10- to 14-year-old children engaged in child labor. This number may have been as high as 15 million children. In 1993 employers in Bangladesh’ ready-made garment (RMG) industry dismissed 50,000 children (c. 75 percent of child workers in the textile industry) out of fear of economic reprisals of the imminent passage of the Child Labor Deterrence Act (the Harkin Bill after Senator Tom Harkin, one of the US Senators who proposed the bill). The act which banned “importation to the United States of products which are manufactured or mined in whole or in part by children” would have resulted in the loss of lucrative American contracts. Its impact on Bangladesh’s economy would have been significant as the export-oriented ready-made garment industry represents most of the country’s exports.

In Bangladesh, 3.5 million workers in 4,825 garment factories produce goods for export to the global market, principally Europe and North America. The Bangladeshi garment industry generates 80% of the country’s total export revenue. However, the wealth generated by this sector has led to few improvements in the lives of garment workers, 85% of whom are women. The majority of garment workers in Bangladesh earn little more than the minimum wage, set at 3,000 taka a month (approximately £25), far below what is considered a living wage, calculated at 5,000 taka a month (approximately £45), which would be the minimum required to provide a family with shelter, food, and education. According to Transparency International, Bangladesh (TIB) report, RMG workers are paid 26% less in Bangladesh (Daily Star, 26.04.19). This study basically focuses on workers’ problems and on the basis of problems, specific intervention would also be identified.

However, women workers face problems. Most women come from low-income families. Low wage of women workers and their compliance have enabled the industry to compete with the world market. Women are paid far less than men mainly due to their lack of education. Women are reluctant to unionize because factory owners threaten to fire them. Even though trade unionization is banned inside the Export Processing Zones (EPZ), the working environment is better than that of the majority of garment factories that operate outside the EPZs. But, pressure from buyers to abide by labor codes has enabled factories to maintain satisfactory working conditions.

As well as earning a pittance, Bangladeshi factory workers face appalling conditions. Many are forced to work 14-16 hours a day seven days a week, with some workers finishing at 3 am only to start again the same morning at 7.30 am. On top of this, workers face unsafe, cramped and hazardous conditions which often lead to work injuries and factory fires. Since 1990, more than 400 workers have died and several thousand more have been wounded in 50 major factory fires. Sexual harassment and discrimination is widespread and many women workers have reported that the right to maternity leave is not upheld by employers. Factory management also take steps to prevent the formation of trade unions, a right protected under the Freedom of Association and Collective Bargaining ILO Conventions, which Bangladesh ratified in 1972.

Rana Plaza incident created international concern about human security in this sector in Bangladesh six years ago in 2013. Just before 9 a.m. on 24th April 2013, the eight-story Rana Plaza came crashing down. The building, in the Savar area outside Dhaka, the Bangladesh capital, contained five garment factories on its upper floors. These supplied clothes to well-known fashion brands around the world. A government inspector had ordered the Rana Plaza’s evacuation the previous day after large cracks had appeared in the walls. But on the morning of the collapse, factory managers persuaded and cajoled workers to return, telling them it was safe. In some cases, managers threatened them with dismissal if they did not comply. Shortly afterward, Savar was affected by a power cut. Once the Rana Plaza’s electrical generators were switched on, the building started to shake and then collapsed. More than 1,100 people were killed and over 2000 were grievously injured.

The Rana Plaza collapse was the biggest disaster ever to hit Bangladesh’s garment export industry the second largest in the world after China’s but it came closely on the heels of another major calamity. Just five months earlier, 112 garment workers had died and several hundred had been injured in a fire at the Tazreen Fashions Factory, the most deadly of a series of factory fires that have killed dozens of other garment workers and left hundreds or more injured in recent years.

Though garments industries’ toilet systems are separated for males and females, 36 to 40 workers use a single toilet which is pretty tough to ensure the personal hygiene of the garment workers. It is very threatening that most workers especially women workforce (68%) are harassed (physically, mentally, economically and sexually) at their workplace. In most of the cases, they are harassed by their immediate supervisor (37%). 33% of workers marked economic exploitation is a more common scenario in such harassment.

The National Garment Workers’ Federation (NGWF) has been fighting for the rights of garment workers in Bangladesh since 1984. Based in Dhaka, the country’s capital, and with 7 branches nationwide, it is the largest trade union federation in the Bangladeshi garment sector, with more than 27,000 members. Women workers are at the frontline of the movement with women making up 18 of the 30 members of the NGWF’s central executive committee.  The NGWF is a founding member of the Bangladesh Garment Workers Unity Council, an umbrella organization of 21 garment worker federations, and is also a member of the arbitration committee, a body that negotiates labor law and cases of workers’ rights violations through dialogue between trade unions, government and factory owners.

The primary responsibility for protecting the rights of workers rests with the Bangladesh government. While Bangladeshi law, despite recent reforms, still falls short of international standards in important respects, rigorous enforcement of existing law would go a long way toward ending impunity for employers who harass and intimidate both workers and local trade unionists seeking to exercise their right to organize and collectively bargain.