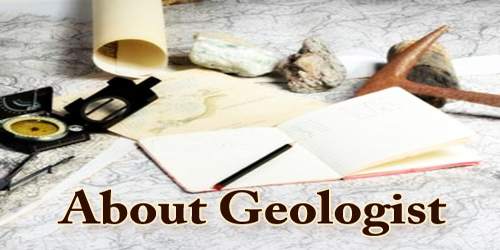 A Geologist is a scientist who studies the earth processes such as earthquakes, landslides, floods, and volcanic eruptions to survey land and draw up safe building plans. Actually, a geologist is someone who works to understand the history of the planet we live on, to better predict the future and explain current occurrences. When geologists investigate earth materials, they not only investigate metals and minerals, but also look for oil, natural gas, water and methods to extract these. Geologists are also important contributors to climate change discussions.

Overall, geology is concerned with the changes of the earth over time, such as climate change and land formation. Geologists usually study geology, although backgrounds in physics, chemistry, biology, and other sciences are also useful. Fieldwork is an important component of geology, although many sub-disciplines incorporate laboratory work. 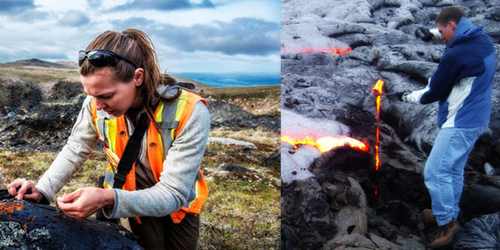 History and Education of  Geologists –

Geologic history provides a conceptual framework and overview of the evolution of the Earth. James Hutton is often viewed as the first modern geologist. In 1785 he presented a paper entitled Theory of the Earth to the Royal Society of Edinburgh. In his paper, he explained his theory that the Earth must be much older than had previously been supposed to allow enough time for mountains to be eroded and for sediments to form new rocks at the bottom of the sea, which in turn were raised up to become dry land. Hutton published a two-volume version of his ideas in 1795 (Vol. 1, Vol. 2). Followers of Hutton were known as Plutonists because they believed that some rocks were formed by vulcanism, which is the deposition of lava from volcanoes, as opposed to the Neptunists, led by Abraham Werner, who believed that all rocks had settled out of a large ocean whose level gradually dropped over time.

Early development of the subject was stratigraphy, the study of order and sequence in bedded sedimentary rocks. Stratigraphers still use the two main principles established by the late 18th-century English engineer and surveyor William Smith, regarded as the father of stratigraphy: (1) that younger beds rest upon older ones and (2) different sedimentary beds contain different and distinctive fossils, enabling beds with similar fossils to be correlated over large distances. Today biostratigraphy uses fossils to characterize successive intervals of geologic time, but as relatively precise time markers only to the beginning of the Cambrian Period, about 540,000,000 years ago. The geologic time scale, back to the oldest rocks, some 4,280,000,000 years ago, can be quantified by isotopic dating techniques. This is the science of geochronology, which in recent years has revolutionized scientific perception of Earth history and which relies heavily on the measured parent-to-daughter ratio of radiogenic isotopes.

Sir Charles Lyell first published his famous book, Principles of Geology, in 1830. This book, which influenced the thought of Charles Darwin, successfully promoted the doctrine of uniformitarianism. This theory states that slow geological processes have occurred throughout the Earth’s history and are still occurring today. In contrast, catastrophism is the theory that Earth’s features formed in single, catastrophic events and remained unchanged thereafter. Though Hutton believed in uniformitarianism, the idea was not widely accepted at the time.

For an aspiring geologist, training typically includes significant coursework in physics, mathematics, and chemistry, in addition to classes offered through the geology department; historical and physical geology, igneous and metamorphic petrology and petrography, hydrogeology, sedimentology, stratigraphy, mineralogy, palaeontology, physical geography, and structural geology are among the many required areas of study. Most geologists also need skills in GIS and other mapping techniques. Geologists may concentrate their studies or research in one or more of the following disciplines:

Career: Geology can be a very interesting and rewarding career. The minimum training required is a four-year college degree in geology. Geologists work in a variety of settings. These include – natural resource companies, environmental consulting companies, government agencies, non-profit organizations, and universities. Many geologists do fieldwork at least part of the time. Others spend their time in laboratories, classrooms or offices. All geologists prepare reports, do calculations and use computers.

Professional geologists work for a wide range of government agencies, private firms, and non-profit and academic institutions. They are usually hired on a contract basis or hold permanent positions within private firms or official agencies. Most geology graduates with a strong academic background and good grades have no trouble finding employment if they are willing to move to a location where work is available. Geologists in academia usually hold an advanced degree in a specialized area within their geological discipline and are employed by universities. 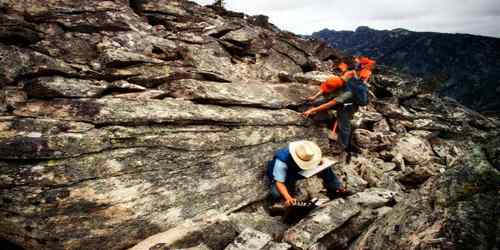 What does a Geologist do?

All divisions of geology provide highly useful information towards understanding the earth and its inhabitants. Depending on the particular specialization in geology, a geologist may study and map rock formations, collect rock samples and fossils, or measure the physical properties of the earth. This helps geologists interpret the active geological processes during the past several million years of earth’s history. Geology plays a vital role behind the success of many other different disciplines, such as climatology, civil engineering, and evolutionary biology.

Workplace of a Geologist –

Geologist’s works mainly in the field outdoors, but they can also do research within laboratories, classrooms, and offices. Since geology deals with much fieldwork, one should be able to adapt to weather changes and to varying terrains.

Geologists are also in the forefront of preventing and mitigating damage from natural hazards and disasters such as earthquakes, volcanoes, tsunamis, and landslides. A geologist may also work with a variety of organizations over the span of their employment, such as non-profit organizations, universities and natural reserve companies, or work as a consultant.