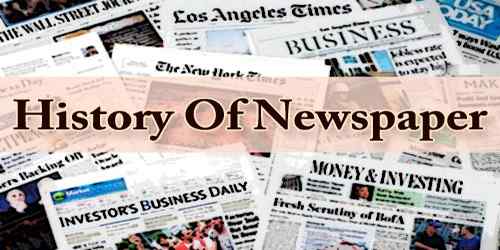 A newspaper is a serial publication that contains news on current events of special or general interest. It is a powerful mode of mass communication. It gained popularity day by day. It is published all over the world in many different languages. Newspapers can cover a wide variety of fields such as politics, business, sports and art, and often include materials such as opinion columns, weather forecasts, reviews of local services, obituaries, birth notices, crosswords, editorial cartoons, comic strips, and advice columns.

Most newspapers are businesses, and they pay their expenses with a mixture of subscription revenue, newsstand sales, and advertising revenue. The journalism organizations that publish newspapers are themselves often metonymically called newspapers.

Newspapers have traditionally been published in print (usually on cheap, low-grade paper called newsprint). However, today most newspapers are also published on websites as online newspapers, and some have even abandoned their print versions entirely.

Newspaper, publication usually issued daily, weekly, or at other regular times that provide news, views, features, and other information of public interest and that often carries advertising.

In Ancient Rome, Acta Diurna (“daily acts”), or government announcement bulletins, were produced. They were carved in metal or stone and posted in public places. In China, early government-produced news-sheets, called Dibao, circulated among court officials during the late Han dynasty (second and third centuries AD). Between 713 and 734, the Kaiyuan Za Bao (“Bulletin of the Court”) of the Chinese Tang Dynasty published government news; it was handwritten on silk and read by government officials. In 1582, there was the first reference to privately published news sheets in Beijing, during the late Ming Dynasty.

In England, the printed news book or news pamphlet usually related to a single topical event such as a battle, disaster, or public celebration. The earliest known example is an eyewitness account of the English victory over the Scots at the Battle of Flodden (1513). Other forerunners include the town crier and ballads and broadsides.

In the first two decades of the 17th century, more or less regular papers printed from movable types appeared in Germany, Italy, and the Netherlands. The Dutch “corantos” (“currents of news”), which strung together items extracted from foreign journals, became the sources for English and French translations published in Amsterdam as early as 1620. Rudimentary newspapers appeared in many European countries in the 17th century, and broadsheets with social news were published in Japan in the Tokugawa period (1603-1867).

The first English daily was ‘The Daily Courant’ (1702-35). Not until 1771 did Parliament formally concede journalists the right to report its proceedings. The Times, which became a model for high quality and later led in mechanical innovation, was founded by John Walter in 1785, and The Observer was founded in 1791. The Thirty Years’ War (1618-48) set back incipient newspapers in Germany, and censorship in various forms was general throughout Europe. Sweden passed the first law guaranteeing freedom of the press in 1766.

The first recorded attempt to found a newspaper of the modern type in South Asia was by William Bolts, a Dutchman in the employ of the British East India Company in September 1768 in Calcutta. However, before he could begin his newspaper, he was deported back to Europe. In 1780 the first newsprint from this region, Hicky’s Bengal Gazette, was published by an Irishman, James Augustus Hicky. He used it as a means to criticize the British rule through journalism.

In France, the first daily, Journal de Paris, was started in 1771, and the Journal des Débats (1789), published until World War II, was founded as a daily to report on sessions of the National Assembly. Papers multiplied during the Revolution and decreased sharply after it. The first newspaper in the United States, Publick Occurrences Both Foreign and Domestick (Boston, September 1690), was suppressed by the colonial governor after one issue. In 1704 the Boston News-letter began publication as a weekly issued by the postmaster. The Boston Gazette (1719) was printed by James Franklin, Benjamin Franklin’s brother. Independent newspaper publishing in the English colonies is considered to have begun with James Franklin’s New-England Courant (1721).

Freedom of the press was advanced in a landmark case in 1735 when John Peter Zenger, a New York City newspaper publisher, was acquitted of libel on the defense that his political criticism was based on fact. Press freedom in the United States was further secured by the First Amendment to the U.S. Constitution (1791). Most of the press of the new republic proved fiercely partisan in the political struggles between the Federalists and Jeffersonian Republicans.

The history of Middle Eastern newspapers goes back to the 19th century. Many editors were not only journalists but also writers, philosophers, and politicians. With unofficial journals, these intellectuals encouraged public discourse on politics in the Ottoman and Persian Empires. Literary works of all genres were serialized and published in the press as well.

The first newspapers in the Ottoman Empire were owned by foreigners living there who wanted to make propaganda about the Western world. The earliest was printed in 1795 by the Palais de France in Pera. Indigenous Middle Eastern journalism started in 1828, when Muhammad Ali, Khedive of Egypt, ordered the local establishment of the gazette Vekayi-i Misriye (Egyptian Affairs). It was first paper written in Ottoman Turkish and Arabic on opposite pages, and later in Arabic only, under the title “al-Waqa’i’a al-Masriya”.

Circulation in the low thousands was common for papers at the beginning of the 19th century. Rising circulations were made possible by increased literacy and by technological advances in mechanical typesetting, in high-speed printing (rotary press), in communications (telegraph and telephone), and in transport (railway). Led by papers in Great Britain and the United States, newspapers broadened their appeal and reduced prices. In 1814, The Times (London) acquired a printing press capable of making 1,100 impressions per hour. Soon, this press was adapted to print on both sides of a page at once. This innovation made newspapers cheaper and thus available to a larger part of the population.

In 1830, the first inexpensive “penny press” newspaper came to the market: Lynde M. Walter’s Boston Transcript. Penny press papers cost about one-sixth the price of other newspapers and appealed to a wider audience, including less educated and lower-income people. In France, Émile de Girardin started “La Presse” in 1836, introducing cheap, advertising-supported dailies to France. In 1848, August Zang, an Austrian who knew Girardin in Paris, returned to Vienna to introduce the same methods with “Die Presse” (which was named for and frankly copied Girardin’s publication). In western Europe, many papers became primarily organs of political and literary opinion.

Early in the 20th century, the number of American papers reached a peak (more than 2,000 dailies and 14,000 weeklies). They declined in number thereafter, though total circulation rose. During the 1920s and ’30s competition for circulation continued, and the wide use of syndicated columnists and ready-to-use features, comic strips, crossword puzzles, and other amusements developed.

Traditionally newspapers are printed on newsprint paper, usually appear without a cover, folded rather than bound together, with a masthead, and are normally larger than 297 mm x 420 mm in size. They may include supplements such as color magazines, or other inserts for special features or events.