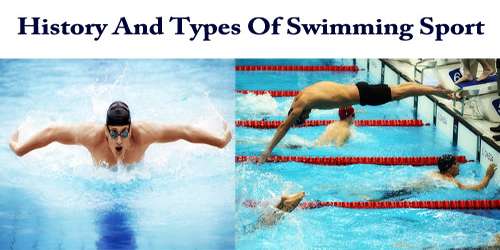 History And Types Of Swimming Sport

Swimming is a great aerobic workout for people with most types of arthritis. The water actually keeps us cool, even as our heart gets a great workout. We will probably be able to keep our self going for a longer time than if we were running. That’s because it’s fun and gentle on our joints and muscles. The water can also feel relaxing.

Actually, Swimming is an individual or team racing sport that requires the use of one’s entire body to move through water. The sport takes place in pools or open water (e.g., in a sea or lake). Competitive swimming is one of the most popular Olympic sports, with varied distance events in butterfly, backstroke, breaststroke, freestyle, and individual medley. In addition to these individual events, four swimmers can take part in either a freestyle or medley relay. A medley relay consists of four swimmers who will each swim a different stroke, ordered as backstroke, breaststroke, butterfly and freestyle.

Swimming is often the first sport that is thought of when considering athletics involving water. The typical swimming competition includes the backstroke, front crawl, breaststroke, or butterfly, and competitors have the option of using all or only one type during the race. The point of swimming competitions is to have the fastest time among participants. The typical equipment for this and similar swimming sports includes a swim cap, swimsuit, and goggles.

Swimming as an exercise is popular as an all-around body developer and is particularly useful in therapy and as exercise for physically handicapped persons. It is also taught for lifesaving purposes. Swimming each stroke requires a set of specific techniques; in competition, there are distinct regulations concerning the acceptable form for each individual stroke. There are also regulations on what types of swimsuits, caps, jewelry and injury tape that are allowed at competitions. Although it is possible for competitive swimmers to incur several injuries from the sport, such as tendinitis in the shoulders or knees, there are also multiple health benefits associated with the sport.

Archaeological and other evidence shows swimming to have been practiced as early as 2500 BCE in Egypt and thereafter in Assyrian, Greek, and Roman civilizations. In Greece and Rome swimming was a part of martial training and was, with the alphabet, also part of elementary education for males. In the Orient swimming dates back at least to the 1st century BCE, there being some evidence of swimming races than in Japan. By the 17th century an imperial edict had made the teaching of swimming compulsory in the schools. Organized swimming events were held in the 19th century before Japan was opened to the Western world. Among the preliterate maritime peoples of the Pacific, swimming was evidently learned by children about the time they walked, or even before. Among the ancient Greeks there is note of occasional races, and a famous boxer swam as part of his training. The Romans built swimming pools, distinct from their baths. In the 1st century BCE the Roman Gaius Maecenas is said to have built the first heated swimming pool.

The lack of swimming in Europe during the Middle Ages is explained by some authorities as having been caused by a fear that swimming spread infection and caused epidemics. There is some evidence of swimming at seashore resorts of Great Britain in the late 17th century, evidently in conjunction with water therapy. Not until the 19th century, however, did the popularity of swimming as both recreation and sport begin in earnest. When the first swimming organization was formed there in 1837, London had six indoor pools with diving boards. The first swimming championship was a 440-yard (400-metre) race, held in Australia in 1846 and annually thereafter. The Metropolitan Swimming Clubs of London, founded in 1869, ultimately became the Amateur Swimming Association, the governing body of British amateur swimming. National swimming federations were formed in several European countries from 1882 to 1889. In the United States swimming was first nationally organized as a sport by the Amateur Athletic Union (AAU) on its founding in 1888.

Men’s swimming became part of the first modern Olympic Games in 1896 in Athens. In 1902, the Australian Richmond Cavill introduced freestyle to the Western world. In 1908, the world swimming association, Fédération Internationale de Natation (FINA), was formed. Women’s swimming was introduced into the Olympics in 1912; the first international swim meet for women outside the Olympics was the 1922 Women’s Olympiad. Butterfly was developed in the 1930s and was at first a variant of breaststroke, until it was accepted as a separate style in 1952.

Internationally, competitive swimming came into prominence with its inclusion in the modern Olympic Games from their inception in 1896. Olympic events were originally only for men, but women’s events were added in 1912. Before the formation of FINA, the Games included some unusual events.

The practice of reducing exercise in the days just before an important competition is called tapering. Tapering is used to give the swimmer’s body some rest without stopping exercise completely. A final stage is often referred to as “shave and taper”: the swimmer shaves off all exposed hair for the sake of reducing drag and having a sleeker and more hydrodynamic feel in the water. Additionally, the “shave and taper” method refers to the removal of the top layer of “dead skin”, which exposes the newer and richer skin underneath. This also helps to “shave” off mere milliseconds on our time.

In 1900, for instance, when the Games’ swimming events were held on the Seine River in France, a 200-meter obstacle race involved climbing over a pole and a line of boats and swimming under them. Such oddities disappeared after FINA took charge. Under FINA regulations, for both Olympic and other world competition, race lengths came increasingly to be measured in meters, and in 1969 world records for yard-measured races were abolished. The kinds of strokes allowed were reduced to freestyle (crawl), backstroke, breaststroke, and butterfly. All four strokes were used in individual medley races.

Swimming is an event at the Summer Olympic Games, where male and female athletes compete in 16 of the recognized events each. Olympic events are held in a 50-meter pool, called a long course pool. There are forty officially recognized individual swimming events in the pool; however the International Olympic Committee only recognizes 32 of them. The international governing body for competitive swimming is the Fédération Internationale de Natation (“International Swimming Federation”), better known as FINA.

Swimming in open water – Individual heats, and then competitions for long distances on open water bodies began to be held at the end of the XIX century. Probably the most famous of them are the heats across the English Channel; the first English Channel was overcome in 1875 by Englishman Matthew Webb.

In competitive swimming, four major styles have been established. These have been relatively stable over the last 30–40 years with minor improvements. They are:

Butterfly – The butterfly stroke, used only in competition, differs from the breaststroke in arm action. In the butterfly, the arms are brought forward above the water. The stroke was brought to the attention of U.S. officials in 1933 during a race involving Henry Myers, who used the stroke. He insisted that his stroke conformed to the rules of breaststroke as then defined. After a period of controversy, the butterfly was recognized as a distinct competitive stroke in 1953. The frog kick originally used was abandoned for a fishtail (dolphin) kick, depending only on the up-and-down movement of the legs.

Backstroke – Backstroke was first included as a stand-alone view at the 1900 Olympics. In the early years, swimmers used an inverted breaststroke. The first major success in swimming crawl on the back was achieved by the American Harry Hebner, who won the 1912 Olympics; after that, in swimming on the back, the crawl quickly displaced the breaststroke.

Starting in swimming on the back is made of water: the athlete, while facing the nightstand, clings to the starting rails with both hands, with his feet resting on the side of the pool. Excluding the moment of the turn, the athlete must swim on his back; “A normal position on the back may include rotational movement of the body in a horizontal plane up to 90 ° inclusive; the position of the head is not regulated.” An athlete can be completely immersed in water only “during the turn, at the finish and at a distance of no more than 15 m after the start and every turn”.

The breaststroke is believed to be the oldest of strokes and is much used in lifesaving and recreational swimming as well as in competitive swimming. The stroke is especially effective in rough water. As early as the end of the 17th century, the stroke was described as consisting of a wide pull of the arms combined with asymmetrical action of the legs and simulating the movement of a swimming frog, hence the usual term frog kick. The stroke is performed lying face down in the water, the arms always remaining underwater. The early breaststroke featured a momentary glide at the completion of the frog kick. Later the competitive breaststroke eliminated the glide. In the old breaststroke, breath was taken in at the beginning of the arm stroke, but in the later style, breath was taken in near the end of the arm pull.

Freestyle – The crawl, the stroke used in competitive freestyle swimming, has become the fastest of all strokes. It is also the almost unanimous choice of stroke for covering any considerable distance. The stroke was in use in the Pacific at the end of the 19th century and was taken up by the Australian swimmer Henry Wickham about 1893. The brothers Syd and Charles Cavill of Australia popularized the stroke in Europe in 1902 and in the United States in 1903. The crawl was like the old sidestroke in its arm action, but it had a fluttering up-and-down leg action performed twice for each arm stroke. Early American imitators added an extra pair of leg actions, and later as many as six kicks were used. The kicks also varied in kind. In the crawl, the body lies prone, flat on the surface of the water, with the legs kept slightly under the water. The arms move alternately, timed so that one will start pulling just before the other has finished its pull, thus making propulsion continuous. Breathing is done by turning the head to either side during recovery of the arm from that side. Since 1896 the crawl has been used in more races than any other stroke.

In freestyle swimming, the only restriction on the way of swimming is that an athlete can be completely submerged in water only “during the turn and at a distance of no more than 15 m after the start and each turn”.

In competition, only one of these styles may be used except in the case of the individual medley, or IM, which consists of all four. In this latter event, swimmers swim equal distances of butterfly, then backstroke, breaststroke, and finally, freestyle. In competition there are freestyle races at distances of 50, 100, 200, 400, 800, and 1,500 meters; backstroke, breaststroke, and butterfly races at 100 meters and 200 meters; individual medley races at 200 meters and 400 meters; the freestyle relays, 4 × 100 meters and 4 × 200 meters; and the medley relay, 4 × 100 meters. Some short course competitions also include the 100-yard or 100-meter IM particularly, for younger or newer swimmers (typically under 14 years) involved in club swimming, or masters swimming (over 18).

Starts are all (with the exception of the backstroke) from a standing or forward-leaning position, the object being to get the longest possible glide before the stroke begins. All races are in multiples of the pool length, so that the touch before turning, which is varied for different stroke races, is important for success. In relay races, a swimmer finishes his leg of the relay by touching the starting edge of the pool, upon which his next teammate dives into the water to begin his leg.