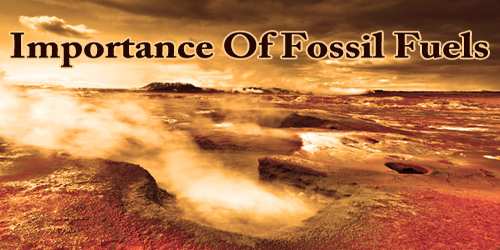 Fossil fuels contain high percentages of carbon and include petroleum, coal, and natural gas. Commonly used derivatives of fossil fuels include kerosene and propane. Fossil fuels range from volatile materials with low carbon-to-hydrogen ratios (like methane) to liquids (like petroleum), to nonvolatile materials composed of almost pure carbon, like anthracite coal. Methane can be found in hydrocarbon fields either alone, associated with oil, or in the form of methane clathrates.

All contain carbon and were formed as a result of geologic processes acting on the remains of organic matter produced by photosynthesis, a process that began in the Archean Eon (4.0 billion to 2.5 billion years ago). Most carbonaceous material occurring before the Devonian Period (419.2 million to 358.9 million years ago) was derived from algae and bacteria, whereas most carbonaceous material occurring during and after that interval was derived from plants.

When fossil fuels are burned, they release carbon dioxide and other greenhouse gases, which in turn trap heat in our atmosphere, making them the primary contributors to global warming and climate change. Most air pollution deaths are due to fossil fuels, and fossil fuel phase-out would save 3.6 million lives each year.

Fossil fuels are of great importance because they can be burned (oxidized to carbon dioxide and water), producing significant amounts of energy per unit mass. The use of coal as a fuel predates recorded history. Coal was used to run furnaces for the melting of metal ore. Semi-solid hydrocarbons from seeps were also burned in ancient times, but these materials were mostly used for waterproofing and embalming. Commercial exploitation of petroleum began in the 19th century, largely to replace oils from animal sources (notably whale oil) for use in oil lamps. Natural gas, once flared-off as an unneeded byproduct of petroleum production, is now considered a very valuable resource. Natural gas deposits are also the main source of the element helium.

Fossil fuels are found in 96% of the items we use each day. One major use of these products is as fuel, gasoline for cars, jet fuel, heating oil, and natural gas used to generate electricity. Not only does the oil and natural gas industry supply a massive number of jobs, the taxes, and royalties generated from revenue the industry directly fund schools, roads, emergency services and more. The products produced by fossil fuels are essential to our daily lives, creating materials like plastics, medicines, computers and life-saving devices like MRI scanners.

The wide scale use of fossil fuels, coal at first and petroleum later, to fire steam engines enabled the Industrial Revolution. At the same time, gas lights using natural gas or coal gas were coming into wide use. The invention of the internal combustion engine and its use in automobiles and trucks greatly increased the demand for gasoline and diesel oil, both made from fossil fuels. Other forms of transportation, railways, and aircraft, also required fossil fuels. The other major use for fossil fuels is in generating electricity and as feedstock for the petrochemical industry. Tar, a leftover of petroleum extraction, is used in construction of roads. Levels of primary energy sources are the reserves in the ground. Flows are production of fossil fuels from these reserves. The most important part of primary energy sources are the carbon based fossil energy sources.

Advantages and Disadvantages of Fossil Fuels –

These are the natural sources of energy and have extensive applications in industrial as well as domestic purposes.

The use of fossil fuels raises serious environmental concerns. The burning of fossil fuels produces around 21.3 billion tonnes (21.3 gigatonnes) of carbon dioxide (CO2) per year. It is estimated that natural processes can only absorb about half of that amount, so there is a net increase of 10.65 billion tonnes of atmospheric carbon dioxide per year. Carbon dioxide is a greenhouse gas that increases radiative forcing and contributes to global warming along with ocean acidification. A global movement towards the generation of low-carbon renewable energy is underway to help reduce global greenhouse-gas emissions.