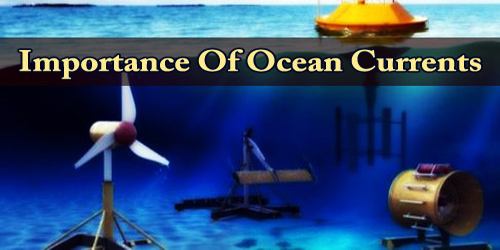 Much larger currents are at work in our oceans, circulating water around the world. These ocean currents, which are massive currents that are influenced by a variety of different forces that act to propel the water both on the surface and in deep ocean waters. This movement has a significant effect on the earth’s weather. For example, the Gulf Stream current carries warm water toward northern Europe. Due to this, coastal countries in northern Europe have a milder winter than coastal areas in the northeast United States that are much farther south.

Ocean currents are an important abiotic factor that significantly influences food webs and the reproduction of marine organisms and the marine ecosystems that they inhabit. Many species with limited mobility are dependent on this “liquid wind” to bring food and nutrients to them and to distribute larvae and reproductive cells. Even fish and mammals living in the ocean may have their destinations and food supply affected by currents.

Knowledge of surface ocean currents is essential in reducing the costs of shipping since traveling with them reduces fuel costs. In the wind-powered sailing-ship era, knowledge of wind patterns and ocean currents was even more essential. A good example of this is the Agulhas Current (down along eastern Africa), which long prevented sailors from reaching India. In recent times, around-the-world sailing competitors make good use of surface currents to build and maintain speed. Ocean currents are also very important in the dispersal of many life forms. An example is the life-cycle of the European Eel.

Ocean currents are important in the study of marine debris, and vice versa. These currents also affect temperatures throughout the world. For example, the ocean current that brings warm water up the north Atlantic to northwest Europe also cumulatively and slowly blocks ice from forming along the seashores, which would also block ships from entering and exiting inland waterways and seaports, hence ocean currents play a decisive role in influencing the climates of regions through which they flow. Cold ocean water currents flowing from polar and sub-polar regions bring in a lot of plankton that are crucial to the continued survival of several key sea creature species in marine ecosystems. Since plankton are the food of fish, abundant fish populations often live where these currents prevail.

Upwelling currents bring cold nutrient-rich waters from the ocean bottom to the surface, supporting many of the most important fisheries and ecosystems in the world. These currents support the growth of phytoplankton and seaweed which provide the energy base for consumers higher in the food chain, including fish, marine mammals, and humans.

Ocean currents can also be used for marine power generation, with areas off of Japan, Florida, and Hawaii being considered for test projects.