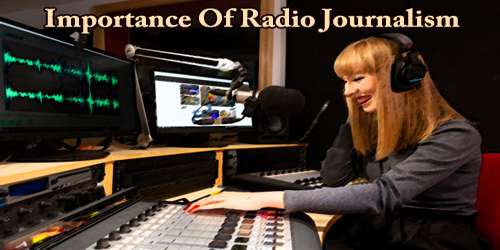 Journalism is associated with the birth of radio and its rapid transformation into a mass medium. Radio reportage, which developed during the 1930s, and distinguished by the eloquence of the journalist, allowed us to understand the evolution of radio and it became a genre in its own right. It peaked at the end of the Second World War. The appearance of television certainly constituted a threat to radio journalism, but finally, the two media managed to coexist over several decades.

On radio, the drafting and delivery of news copy is not a simple matter. Like televisions, but unlike those of the newspapers, its words are constantly dissolving or evanescent: but unlike television’s, they are wholly invisible, as are the people who utter them. Consequently, its listeners seldom give radio their undivided attention. Its news copy needs to be written and presented with these factors constantly in mind to adopt an easy and intelligible speech idiom even as it strives to do justice to the often complex and detailed character of events.

Broadcast Journalism is the field of news and journals which are “broadcast”, that is, published by electrical methods, instead of the older methods, such as printed newspapers and posters. Broadcast methods include radio (via air, cable, and Internet), television (via air, cable, and Internet), and, especially recently, the Internet generally. Such media disperse pictures (static and moving), visual text, and/or sounds.

Scripts for speaking to be broadcast tend to be written differently from text to be read by the public. For instance, the former is generally less complex and more conversational. Radio and television are designed to be seen and heard sooner and more often than is a daily or weekly newspaper.

Broadcast “stories” (articles) can be written in “packages”, “readers”, “voice-overs” (VO) and “sound on tape” (SOT).

Radio journalists have witnessed much of the history of the twentieth century. From early documentary recordings to the ground-breaking war reporting of Ed Murrow and Richard Dimbleby, to the sophisticated commentaries of Alistair Cooke and reporters such as Fergal Keane, International Radio Journalism explores the way radio has covered the most important stories this century and the way in which it continues to document events in Britan, America, Europe and many other countries around the world.

International Radio Journalism is both a theoretical textbook and a practical guide for students of radio journalism, reporters, editors, and producers. The book details training and professional standards in writing, presentation, technology, editorial ethics, and media law in America, Britain, Australia, and other English speaking countries and examines the major public sector broadcast networks such as the BBC, CBC, NPR and ABC as well as the work of commercial and small public radio stations.

Radio broadcasting, in particular, does not seem to be at risk of disappearing in the short term. Radio remains an essential element within the practice and systems of journalism, on a daily basis, in exceptional circumstances or in times of crisis. The credibility of radio news remains very high and higher than other media. On the other hand, several changes are missing from its evolution.

Just as print journalism is more than the front and back pages and includes reviews, in-depth analyses, and comments, which also solicit the attention of the reader, so radio journalism is much more than ‘the news’. It is to be found in the factual output of many kinds: in programming as much as in bulletins. It is also expensive to produce, requiring more effort to source and to evidence, to illustrate and to communicate, than does the playing of pre-recorded music or the relaying of spontaneous conversation. The many forms in which radio journalism exists today could no more be invented overnight than Fessenden could conceive of a news bulletin for in his first broadcast. They developed slowly, often beginning as the spark of an idea, always a product of the institutional context from which they emerged, and, once established, mimicked and extended by rival radio stations.

Some institutional contexts were more conducive to the development of radio journalism than others, and in different countries, radio industries developed in different ways. In the United States, radio remained largely in the hands of commercial operators, and these two sharply contrasting models of institutional ownership influenced the development of radio journalism in different ways in different countries. This distinction between the public and private sectors of the radio industry, one larger or smaller than the other depending on the country one cares to examine, is an important one.

Thanks to the creation of web sites, it has become possible to listen to a radio station outside a geographical area. The relationship with the editorial area has been changed and has brought about some different practices (including the discovery of distant stations, or keeping in contact with a home country). Many radio stations, called ‘web-radios’, have also been created on the internet. Wherever they are in the world, how have these new online stations contributed to the emergence of new forms of civic expression and participation, and how do they contribute to a reactivation of a public sphere which extends significantly beyond local and national boundaries?

At certain radio stations, the listener is omnipresent online. Stations have also developed an interactive presence online through the interactivity of the internet. Many programs have their Facebook pages and their Twitter accounts and permit exchanges between listeners, who can give their opinions and ask their own questions of organizers. Images and text often complement a program which has become more complex, not restricting itself just to listeners to the broadcast content. One can also ask if ‘participatory’ journalism (blogs, commentaries, and so on) has developed on the internet.