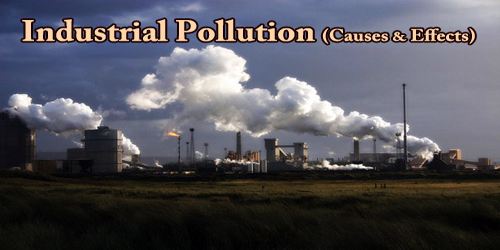 Ever since the Industrial Revolution in the 1700s and 1800s, the effects of the industries have been seen throughout the Earth. The face of the world changed as the need for raw materials, cheap labor, and markets increased. Industrialized countries ravaged others, in their quest for greatness. Human lives were neither considered nor spared. The land was not cared for, nor was the environment. Everything was used and abused. Wars were fought for control and some parts of the world even in the 21st century are struggling to rise up from the ashes.

During the revolution, technology, manufacturing, and science all began rapidly increasing, and continue to grow even today. Before the industrial revolution, industries remained small, and their primary pollutant was smoke. The plants had limited time and size, which meant pollution, was minor. It was not until companies turned into huge plants and industries that the harmful effects of pollution became known.

The various industries causing pollution are the mining and metallurgical industries, power generating plants, manufacturing factories, processing industries, etc. Major environmental disasters have been caused due to industrial mishaps, which have yet to be brought under control. Below are a few of the causes of industrial pollution that have resulted in environmental degradation.

Lack of Policies to Control Pollution – Lack of effective policies and poor enforcement drive allowed many industries to bypass laws made by the pollution control board which resulted in mass-scale pollution that affected the lives of many people.

Unplanned Industrial Growth – In most industrial townships, unplanned growth took place wherein those companies flouted rules and norms and polluted the environment with both air and water pollution.

Using Old and Outdated Technology – Updating technology is expensive, and there are many companies and plants which are relying on outdated technology to continue operating their business successfully. Older technologies tend to produce large amounts of waste.

Even when companies realize the harmful effect they are having on the environment, they choose to save money by keeping their old systems instead of upgrading.

Inefficient Waste Disposal – Water pollution and soil pollution are often caused directly due to inefficiency in the disposal of waste. Long term exposure to polluted air and water causes chronic health problems, making the issue of industrial pollution into a severe one. It also lowers the air quality in surrounding areas which causes many respiratory disorders.

Natural Resource Use – Raw material is necessary for a lot of industries, which requires them to pull underground elements. One of the most common forms of leaching from natural resources is fracking for oil. When industries pull minerals, the process causes pollution in the soil and also causes oil leaks and spills that are harmful and deadly to people and animals.

The Sheer Number of Industries – There are many industries and factories, and most of them are polluting the air every day. Small sectors that have to rely on grants from the government to keep operating are often able to avoid following environmental regulations. Those companies have been discovered to release significant amounts of toxic gas, making pollution an even more substantial issue from those smaller industries.

Water pollution: The ecosystem has been significantly impacted because of pollution, and the consequence will affect many future generations. Big industries and manufacturing plants use significant amounts of water from nearby lakes, rivers, and oceans to operate. During the manufacturing process, the water is exposed to chemicals, heavy metals, organic sludge, and radioactive waste. That water is then dumped back into its original water source. Not only does this process affect the plants, animals, and insects in their habitat, farmers also use that water for irrigation, causing harmful effects to the food we eat.

Water pollution has caused many different groundwater sources to be labeled as unsafe for people and animals alike. Once it is rendered dangerous, the only use for that water is for it to be reused in the plants that initially harmed it.

Soil pollution: Soil pollution is creating problems in agriculture and destroying local vegetation. It also causes chronic health issues to the people that come in contact with such soil on a daily basis.

Air pollution: Industrial by-products in the form of gases are released from Iron and steel industries, power plants. These cause harmful effects on human health such as eye irritations, occurrences, and aggravation of respiratory diseases such as asthma, chronic bronchitis, Chronic Obstructive pulmonary disorder, and Emphysema. The residue settles on the plants and is consumed by the animals which are then consumed by the larger animals. The toxins get accumulated in these animals and cause them to harm too. The plant’s growth and reproduction is affected. Many of the gases released are greenhouse gases affecting the temperature of our atmosphere and cause global warming. Acid rain is a consequence of air pollution following industrial pollution.

Wildlife Extinction: By and large, the issue of industrial pollution shows us that it causes natural rhythms and patterns to fail, meaning that the wildlife is getting affected in a severe manner. Habitats are being lost, species are becoming extinct and it is harder for the environment to recover from each natural disaster. Major industrial accidents like oil spills, fires, the leak of radioactive material, and damage to property are harder to clean-up as they have a higher impact in a shorter span of time.

Global Warming: With the rise in industrial pollution, global warming has been increasing at a steady pace. Smoke and greenhouse gases are being released by industries into the air which causes an increase in global warming. Melting of glaciers, extinction of polar bears, floods, tsunamis, hurricanes are few of the effects of global warming. The issue of industrial pollution concerns every nation on the planet. As a result, many steps have been taken to seek permanent solutions to the problem. Better technology is being developed for the disposal of waste and recycling as much polluted water in the industries as possible.

Organic methods are being used to clean the water and soil, such as using microbes that naturally use heavy metals and waste as feed. Policies are being pushed into place to prevent further misuse of land. However, industrial pollution is still rampant and will take many years to be brought under control.