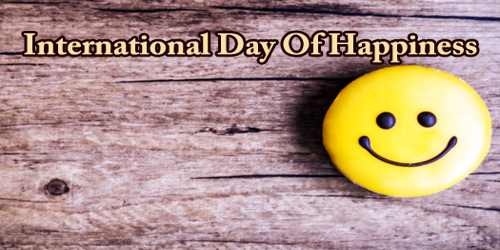 The International Day of Happiness is celebrated across the world on 20th March to spread and make people understand that happiness is one of the best gifts that we can give and is also an important goal of several organizations working for it. It was established by the United Nations General Assembly on 28th June 2012.

The General Assembly,(…) Conscious that the pursuit of happiness is a fundamental human goal,(…) Recognizing also the need for a more inclusive, equitable and balanced approach to economic growth that promotes sustainable development, poverty eradication, happiness and the well-being of all peoples, Decides to proclaim 20 March the International Day of Happiness, Invites all Member States, organizations of the United Nations system and other international and regional organizations, as well as civil society, including non-governmental organizations and individuals, to observe the International Day of Happiness in an appropriate manner, including through education and public awareness-raising activities(…)

The day recognizes that happiness is a fundamental human goal, and calls upon countries to approach public policies in ways that improve the well-being of all peoples.

By designating a special day for happiness, the UN aims to focus world attention on the idea that economic growth must be inclusive, equitable, and balanced, such that it promotes sustainable development, and alleviates poverty. Additionally, the UN acknowledges that in order to attain global happiness, economic development must be accompanied by social and environmental well-being.

The General Assembly of the United Nations in its resolution 66/281 of 12th July 2012 proclaimed 20 March the International Day of Happiness, recognizing the relevance of happiness and well-being as universal goals and aspirations in the lives of human beings around the world and the importance of their recognition in public policy objectives. It also recognized the need for a more inclusive, equitable, and balanced approach to economic growth that promotes sustainable development, poverty eradication, happiness, and the well-being of all peoples.

The resolution was initiated by Bhutan, a country that recognized the value of national happiness over national income since the early 1970s and famously adopted the goal of Gross National Happiness over Gross National Product. It also hosted a High-Level Meeting on “Happiness and Well-Being: Defining a New Economic Paradigm” during the sixty-sixth session of the General Assembly.

According to some scientists, the key to human wellness is strong social ties and a sense of purpose. That is involved in things that are for the “greater good” of humanity.

Some believe that a positive mindset also plays an important role and is responsible for as much as 90 percent of our feelings of well-being. Like helping others, to work together to improve the community or participation in a religion that promotes communal activities like regular worship.

It is also said that people who are happy tend to live longer and have fewer health issues. Happier people also don’t face a problem with high blood pressure and heart issues. Still, study and research are going on happiness, how to find or increase happiness levels.

Therefore, the International Day of Happiness is a day to value ours and other happiness and make people happy. Realize the importance of happiness in life and work for it.