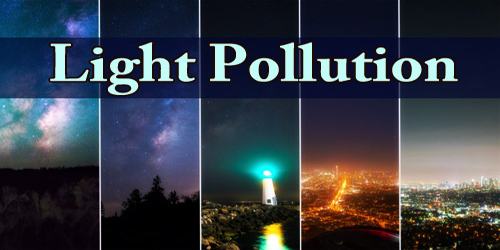 Most environmental pollution on Earth comes from humans and their inventions. Take, for example, the automobile or that miraculous human-made material, plastic. Today, automobile emissions are a major source of air pollution contributing to climate change, and plastics fill our ocean, creating a significant health hazard to marine animals. Electric light can be a beautiful thing, guiding us home when the sun goes down, keeping us safe and making our homes cozy and bright.

However, like carbon dioxide emissions and plastic, too much of a good thing has started to negatively impact the environment. Light pollution, the excessive or inappropriate use of outdoor artificial light, is affecting human health, wildlife behavior, and our ability to observe stars and other celestial objects.

Light pollution, unwanted or excessive artificial light. Like noise pollution, a light pollution is a form of waste energy that can cause adverse effects and degrade environmental quality. Moreover, because light (transmitted as electromagnetic waves) is typically generated by electricity, which itself is usually generated by the combustion of fossil fuels, it can be said that there is a connection between light pollution and air pollution (from fossil-fueled power plant emissions). Control of light pollution, therefore, will help to conserve fuel (and money) and reduce air pollution as well as mitigate the more immediate problems caused by the excessive light. Although light pollution may not appear to be as harmful to public health and welfare as pollution of water resources or the atmosphere, it is an environmental quality issue of no small significance.

It is most severe in highly industrialized, densely populated areas of North America, Europe, and Japan and in major cities in the Middle East and North Africa like Tehran and Cairo, but even relatively small amounts of light can be noticed and create problems. Awareness of the deleterious effects of light pollution began early in the 20th century, but efforts to address effects did not begin until the 1950s. In the 1980s a global dark-sky movement emerged with the founding of the International Dark-Sky Association (IDA). There are now such educational and advocacy organizations in many countries worldwide.

Types and Causes of Light Pollution –

Light pollution is caused by inefficient or unnecessary use of artificial light. Specific categories of light pollution include light trespass, over-illumination, glare, light clutter, and skyglow. A single offending light source often falls into more than one of these categories.

A light that cannot be seen is found on the radio-wave spectrum. When people talk about light pollution they tend to mean one of five specific types:

Over-illumination: This is caused by misuse of lights. Lights that are left on, or even street lamps that aren’t adjusted for daylight savings time, can cause millions of barrels of oil to be wasted. It can have the immediate effect of raising utility costs in an area as well as disrupting natural sleep patterns.

Glare: Glare can be categorized into different types. One such classification is described in a book by Bob Mizon, coordinator for the British Astronomical Association’s Campaign for Dark Skies, as follows:

According to Mario Motta, president of the Massachusetts Medical Society, “…glare from bad lighting is a public-health hazard especially the older you become. Glare light scattering in the eye causes loss of contrast and leads to unsafe driving conditions, much like the glare on a dirty windshield from low-angle sunlight or the high beams from an oncoming car.” In essence, bright and/or badly shielded lights around roads can partially blind drivers or pedestrians and contribute to accidents.

The blinding effect is caused in large part by reduced contrast due to light scattering in the eye by excessive brightness or to a reflection of light from dark areas in the field of vision, with luminance similar to the background luminance. This kind of glare is a particular instance of disability glare, called veiling glare. This is not the same as loss of accommodation of night vision which is caused by the direct effect of the light itself on the eye.

Light clutter: Light clutter is a uniquely man-made issue and it stems from poor placement design. A cluster of business lights, or streetlights, can create a contrast illumination that interferes with night vision and illumination. It can also be strong enough to throw off the natural nocturnal systems of animals.

SkyGlow: This is a term used to refer to the almost dome-like cover of light to city areas. The light that is escaping from street lamps, signs, homes, and businesses goes up to change the quality of light in the atmosphere, and it bounces back down to the city from the atmosphere. It can affect natural growth patterns, and the ability of planes to navigate at night too.

People living in cities with high levels of sky glow have a hard time seeing more than a handful of stars at night. Astronomers are particularly concerned with sky glow pollution as it reduces their ability to view celestial objects. More than 80 percent of the world’s population, and 99 percent of Americans and Europeans, live under sky glow. It sounds pretty, but sky glow caused by anthropogenic activities is one of the most pervasive forms of light pollution.

Light Trespass: Not only is this a form of pollution but it is also a crime in many areas. Light trespass refers to unwanted light from entering someone’s property. It could be light from a sign coming into a residential area or any similar circumstance.

Light pollution is unique as it is caused by man only. There is no comparable natural form of pollution like there is with carbon dioxide. The main causes of light pollution are: