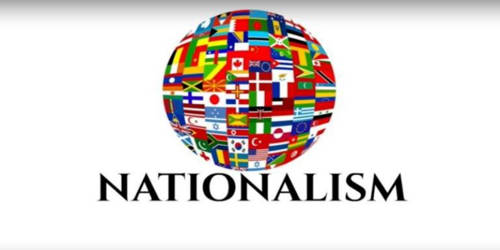 Nationalism is a sense related to the nation. It is a sense of blessing to a country or nation. In Nationalism, this sentiment of loyalty must be present in every citizen. It is an extreme and pervasive force in the political life of mankind. Nationalism is defined as a sentiment of a group of people united together by powerful ties and bonds— having the same faith, common language and common economy, common pattern in life, common history and a common ideal for the future. This ideology certainly has been present in humanity since time immemorial.

Nationalism is probably the most important factor in international politics. A group of people united together by such ties, seeks, expressions, and development of groups by collective personalities through an independent political organization of its own. It is a sentiment of nationhood. In reality, it is more than mere sentiment. The essence of nationalism is a unifying integrating, all-pervasive feeling among the people or peoples of a country who owe their first and last duty towards the nations. These common factors are common language, history, culture, traditions, mentality, and territory.

Nationalism naturally seeks the right of self-determination. Therefore, a feeling of unity and love would happen among national citizens. The right has had the effect of encouraging and fostering the freedom of movement in many countries. As a result, new nation-states have emerged all over the world. It certainly increases the resolve of a nation to defend itself. It encourages environmental protection as well. According to Marxists, nationalism in its present form came in the nation the wake of the Bourgeoisie Democratic Revolution in different countries. It is actually people’s feelings for their nation as superior to all other nations.

Nationalism is a magnetic force that attacks like groups. But within the nation it. sometimes expresses itself in the form of practical patriotism which accentuates the differences between international groups. The effect of this that many minority groups may begin to call themselves nationalism. The possibility of such separate tendencies emerging has to be guarded against.

Real nationalism encourages the man to have a strong feeling of language, caste creed, civil rights, etc equally. People with high national pride would feel ashamed to pollute their nation. Perverted nationalism is full of selfishness. It discourages man to have any ill-feeling towards it.  In contrast, an individual with low Nationalism would throw garbage carelessly. True nationalism begets democracy and encourages people to feel political equity, to democratic spirit. Nationalism- developed in the age aiming at the self-sufficiency of nations, finds it difficult to maintain its position when the nation is not self-sufficient when it cannot consume all that it produces. Nationalism is an ideology that shows an individual’s love & devotion to his nation.

The economic motive reinforces the desire for political power and leads to the policy of colonizing the under-developed countries for all possible exploitation. The present-day tendency is to form multinational concerns in developing countries. This is how the whole of Asia and Africa fell under the greed of nationalism of the west and later on of Japan. Nationalism produces what is known as militant or ultra-nationalism.

Nationalism centers on a country’s culture, language, and often race. It also recognizes the freedom of all nations to preserve their distinct identity of language, and culture. It is a ‘state of mind’ that seeks to make the nation an effective unity and the object of man’s supreme loyalty. Self-love is not bad so long it does not lead to selfishness. It is only true nationalism which can pave the way for internationalism, the edifice of which can be built only on the basis of mutual trust, belief, goodwill and co-operation among nations. It has extended the area of national liberty and individual freedom.