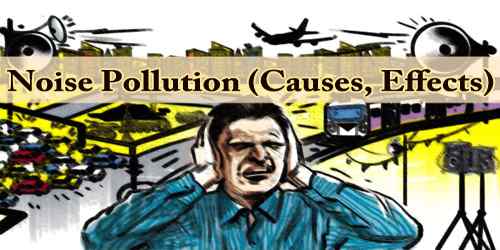 According to the World Health Organization (WHO), “Noise Pollution” is one of the most dangerous environmental threats to health. WHO also defines noise above 65 decibels (dB) as noise pollution. It is also known as environmental noise or sound pollution, is the propagation of noise with ranging impacts on the activity of human or animal life, most of them harmful to a degree. The source of outdoor noise worldwide is mainly caused by machines, transport, and propagation systems.

Most of us are very used to the sounds we hear in everyday life. Loud music, the television, people talking on their phone, the traffic, and even pets barking in the middle of the night. All of these have become a part of the urban culture and rarely disturb us. However, when the sound of the television keeps you from sleeping all night or the traffic starts to give you a headache, it stops becoming just noise and starts turning into noise pollution. For many of us, the concept of pollution is limited to nature and resources. However, noise that tends to disrupt the natural rhythm of life makes for one solid pollutant.

Poor urban planning may give rise to noise disintegration or pollution, side-by-side industrial and residential buildings can result in noise pollution in the residential areas. Some of the main sources of noise in residential areas include loud music, transportation (traffic, rail, airplanes, etc.), lawn care maintenance, construction, electrical generators, explosions, and people. Documented problems associated with urban environment noise go back as far as ancient Rome. Noise is measured in Decibel (dB). Noise pollution associated with household electricity generators is an emerging environmental degradation in many developing nations. The average noise level of 97.60 dB obtained exceeded the WHO value of 50 dB allowed for residential areas. Research suggests that noise pollution is the highest in low-income and racial minority neighborhoods.

So much so that the European Environment Agency estimates that noise is responsible for 72,000 hospital admissions and 16,600 premature deaths every year in Europe alone.

Not only does it hurt humans, but it is also bad for animals, too. According to the National Park Service (NPS) in the United States, noise pollution has an enormous environmental impact and does serious damage to wildlife. Experts say noise pollution can interfere with breeding cycles and rearing and is even hastening the extinction of some species.

In the past few years, scientists have shifted to conducting studies on invertebrates and their responses to anthropogenic sounds in the marine environment. This research is essential, especially considering that invertebrates makeup 75% of marine species, and thus compose a large percentage of ocean food webs. Of the studies that have been conducted, a sizable variety in families of invertebrates have been represented in the research. A variation in the complexity of their sensory systems exists, which allows scientists to study a range of characteristics and develop a better understanding of anthropogenic noise impacts on living organisms.

While the elderly may have cardiac problems due to noise, according to the World Health Organization (WHO), children are especially vulnerable to noise, and the effects that noise has on children may be permanent. Noise poses a serious threat to a child’s physical and psychological health, and may negatively interfere with a child’s learning and behavior.

There are many sources of noise pollution, but here are some of the main ones:

The noise made by animals can go unnoticed, but a howling or barking dog, for example, can produce around 60-80 dB.

While this form of pollution may seem harmless, it, in fact, has far-reaching consequences. The adverse effects on the health of the environment are quite severe. Not only is the local wildlife affected by pollution but humans also face a number of problems due to it.

As well as damaging our hearing by causing tinnitus or deafness, constant loud noise can damage human health in many ways, particularly in the very young and the very old. Here are some of the main ones:

Across Europe, according to the European Environment Agency, an estimated 113 million people are affected by road traffic noise levels above 55 decibels, the threshold at which noise becomes harmful to human health by the WHO’s definition.

Effect on Wildlife – Noise can have a detrimental effect on animals, increasing the risk of death by changing the delicate balance in predator or prey detection and avoidance, and interfering the use of the sounds in communication, especially in relation to reproduction and in navigation. These effects then may alter more interactions within a community through indirect (“domino”) effects. Acoustic overexposure can lead to temporary or permanent loss of hearing.

Species that depend on mating calls to reproduce are often unable to hear these calls due to excessive man-made noise. As a result, they are unable to reproduce and cause declining populations. Others require sound waves to echolocate and find their way when migrating. Disturbing their sound signals means they get lost easily and do not migrate when they should. To cope up with the increasing sound around them, animals are becoming louder, which may further add to the pollution levels. This is why understanding noise pollution can help us lower the impact it has on the environment.

Noise pollution may have caused the death of certain species of whales that beached themselves after being exposed to the loud sound of military sonar. Even marine invertebrates, such as crabs (Carcinus maenas), have been shown to be negatively affected by ship noise. Larger crabs were noted to be negatively affected more by the sounds than smaller crabs. Repeated exposure to the sounds did lead to acclimatization.

As is controlling the sound levels in clubs, bars, parties, and discos. Better urban planning can help in creating ‘No-Noise’ zones, where honking and industrial noise are not tolerated. It is only when our understanding of noise pollution is complete, can we take steps to eradicate it completely.