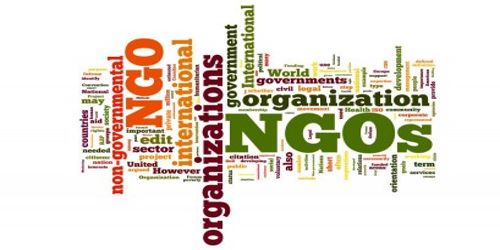 Organization that operates independently from any form of government. is any non-profit, voluntary citizens’ group which is organized on a local, national or international level. Task-oriented and driven by people with a common interest, NGOs perform a variety of service and humanitarian functions, bring citizen concerns to Governments, advocate and monitor policies and encourage political participation through provision of information. Variations of NGOs include:

Examples of some renowned NGO’s:

Purpose: To engage in policy development in Canada and internationally

UN Refugee Agency (UNHCR): Purpose: It strives to ensure that everyone can exercise the right to seek asylum and find safe refuge in another State, with the option to return home voluntarily, integrate locally or to resettle in a third country. The number of refugees of concern to UNHCR stood at 10.5 million at the beginning of 2011

Oxfam: Oxfam is an international confederation of 17 organizations networked together in 92 countries, as part of a global movement for change, to build a future free from the injustice of poverty.

BRAC: Formerly known as Bangladesh Rural Advancement Committee, “is a development organisation dedicated to alleviating poverty by empowering the poor to bring about change in their own lives.” BRAC began in 1972 and has established itself as “a pioneer in recognising and tackling the many different realities of poverty.”

Non-governmental organization (NGO) movements to alleviate poverty, protect the environment, or advocate for human rights are widespread throughout the developing world, and, as of 2002, are estimated to account for over 30% of international development aid. While many of the smaller NGOs in this group are seen as providing positive, uplifting services to local communities, larger multi-national examples of social organizations are prone to the same types of endemic corruption as other corporate entities. As well, NGOs often promote ideologies such as equal rights for women that are in direct conflict with a local government’s political aims.