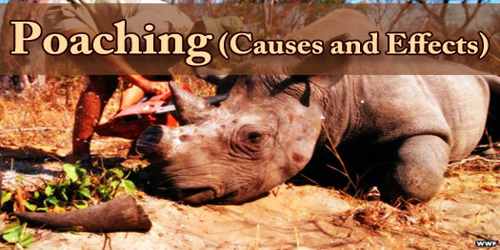 Poaching has been defined as the illegal hunting, capturing, and often killing of wild animals; in law, the illegal shooting, trapping, or taking of game, fish, or plants from private property or from a place where such practices are specially reserved or forbidden. Poaching is a major existential threat to numerous wild organisms worldwide and is an important contributor to biodiversity loss.

Poaching poses a growing threat to elephants, rhinos, and other charismatic animals, as well as to smaller and more obscure creatures, like certain lizards and monkeys. Poaching is detrimental to the ecosystem and actually can hurt our economy. We are inhabitants of this great planet, and it’s our responsibility to sustain it.

Poaching has been done for a number of reasons, including claiming the land for human use, but recently, the illegal act is being done for other ridiculous motives, especially the desire for rare animal products such as ivory, fur, organs, skin, bones, or teeth.

For instance, the rhino has been hunted because some believe its horn has medicinal value. It is so serious that today, the rhino is critically endangered with the Black Rhino’s population decreasing by 97.6% since 1960. Other animals, such as the tiger are killed for their organs, pelts, and bones for medical and aesthetic reasons.

Since the 1980s, the term “poaching” has also been used to refer to the illegal harvesting of wild plant species. In agricultural terms, the term ‘poaching’ is also applied to the loss of soils or grass by the damaging action of feet of livestock which can affect the availability of productive land, water pollution through increased runoff and welfare issues for cattle. Stealing livestock as in cattle raiding classifies as theft, not as poaching. 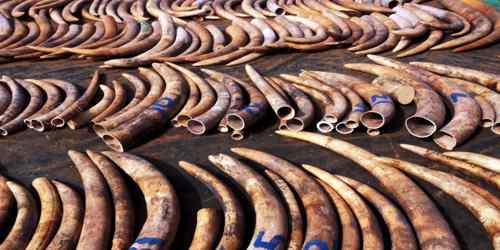 “At the beginning of the 20th century there were 500,000 rhinos; in 1970 there were 70,000; today, there are fewer than 29,000 rhinos surviving in the wild (“Rhino Population Figures”).” Poaching is the practice of killing or trading animals for economic gain or necessity and has resulted in substantial losses of many species throughout developing countries and throughout time.

Every year more and more species are killed and sold in the black market for a quick profit; some of the effects include economic downfall or ecological instability and destruction. The major causes and effects of poaching need to be prevented through implementation.

Our ancestors have been hunting for around 400,000 years. In the past, hunting has played an important role in leadership and community formation. Before the agricultural revolution (around 10,000 years ago), primitive humans relied on the hunting of food for survival, however, since the agricultural revolution, the need for hunting has reduced majorly in most parts of the world. There are many causes for poaching.

Lax and broken regulation systems – Poaching in recent times has increased due to the existence of wildlife protection regulations that can be circumvented. Some government officials have also taken a back seat in tightening poaching rules as they directly benefit from it.

For example, some top officials working in the law enforcement agencies and governments are susceptible to corruption and bribery and are direct beneficiaries of the proceeds from poaching. With the protection of such officials, poachers easily invade the wild and hunt the animals without being tracked.

Highly-priced and valued animal parts, products, and pets – The illegal wildlife market is a multibillion-dollar industry, and for this reason, there are cartels and top government as well as wildlife regulation officials that benefit from the illegal trade.

A report published by Science Magazine on 4th October 2019 claimed that more than 5500 species of mammals, birds, reptiles, and amphibians are sold and bought in the planet’s animal markets.

As previously discussed, some officials in charge are also reluctant to implement wildlife protection policies due to the huge monetary proceeds they get from it or sometimes circumvent the policies in the name of a legal pet or animal market.

But as they do this, more and more animal species become threatened or endangered. Examples are the reptiles and amphibians that are sold to zoos or as exotic pets.

Increasing demand for ivory-like casque of the helmeted hornbill and pangolins for their meat and scales are other examples of the extent of the wildlife trade markets. African pangolins, for instance, are now the targets by poachers as the Asian ones become harder to find.

Unproven religious, aphrodisiac, and medical values – Some animals have been hunted for religious purposes and religious ceremonial objects like the hooves, tails, skin, feathers, teeth, heads, far, horns, ivory, and so on. Some Tibetan monks, for instance, have been known to hunt rare creatures for their religious obligations.

Some animals, like the rhino, are also hunted because it is believed its horn has medicinal values. Turtles, orangutans, snakes, seahorses, and pangolins are equally part of Chinese traditional medicine, believed to cure a myriad of diseases including cancer.

The scales of pangolins and turtle blood, as an example, are ground into a powder and used for their claimed healing powers. Buffalo horns, fresh snake blood, and tiger male parts are believed to have aphrodisiac and virility potency.

Food and exotic dishes for the elite – Some wild animals like the Zebras, Lions, Hippos, Elephants, Gazelles, Snakes, and Giraffe are killed for their meat, traditionally referred to as “bush meat.” The meat of these animals including apes and snakes are a delicacy in certain parts of Africa.

In Asia, exotic wildlife dishes are made from snakes, turtles, pangolins, bats, whales, and orangutans and sold to the elite in exclusive restaurants.

Some animals are also captured alive so that they can be kept by the criminal gangs to show might and power, while others sold as pets. The rhino, for instance, has no known natural predator, except humans.

Humans hunt and kill the animal for its horns, which are in high demand in Asia. They are used for ornamental carvings and traditional medicine.

Habitat loss, logging, and expansion of human settlement areas – The total human population grows larger by the day, forcing people to invade land set out for wild animals. In the process, the animals are killed so that people can grow their cities, develop roads, settle, or practice agriculture.

The destruction of animal habitats causes more animals to starve and are killed when they invade agricultural land or attack livestock.

Logging also creates roads and pathways into the interior of the wild, thereby giving poachers routes to use in accessing the deeper areas of the forests that host a variety of wildlife animals.

Some animals are poached because people want to stop them from encroaching on farms, and poaching is also a sport for some people. Although poaching is mostly under control, the illegal poaching of many of animals is leading to the mass extinction of some species of animals. 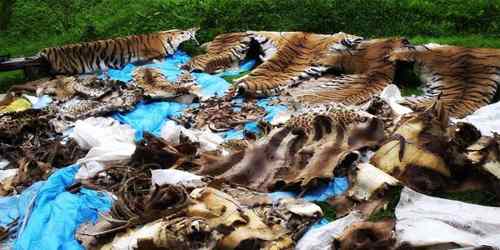 Poaching has devastating consequences for wildlife. In some instances, it’s the primary reason why an animal faces a risk of extinction. This is the case with the African elephant, more than 100,000 of which were killed between 2014 and 2017 for ivory. Poaching has also had a catastrophic impact on rhinos, with more than a thousand slaughtered a year for their horns.

Poaching is more lucrative than other jobs available in the region; this is a tough reality faced by many people in these communities. There are also many effects that occur in local communities due to wildlife poaching. The poaching of animals can have a negative economic effect on the community’s tourism industry; this can be a devastating effect for a community that relies on wildlife to attract tourists.

The detrimental effects of poaching can include:

The emergence of zoonotic diseases caused by the transmission of highly variable retrovirus chains:

Tourists visit some countries for their variety of wild animals. If they go extinct or reduce in number, there would be no more tourism and as such, the economies that depend on tourism will begin to crumble.

A recent study conducted by Austin J. Gallagher and Dr. Neil Hammershlag of the R. J. Dunlap Marine Conservation Program at the University of Miami discussed negative effects on the economy due to poaching. They examined the problem of overfishing sharks and the effects on ecotourism, a sector that many developing nations rely on. The results of the study indicated that a single reef shark will net approximately 73.00-dollars a day in ecotourism, while that same reef shark will net a fisherman only about 50.00-dollars one time for the sale of its fins. With an almost increase of 50 percent in profit, developing countries are losing major money that can be used to actually help their population. Ecotourism is an excellent industry for developing nations, but the industry cannot function without living animals.

In Africa, nearly 600 rangers charged with protecting wildlife were gunned down by poachers between 2009 and 2016 while in the line of duty. In the Democratic Republic of the Congo’s Virunga National Park, one of the continent’s most dangerous, at least 170 rangers have been killed during the past two decades.

Our ecosystems are extremely sensitive, and when a local community has economic challenges it can lead to poaching, which can then lead to the endangerment or even the extinction of another species.