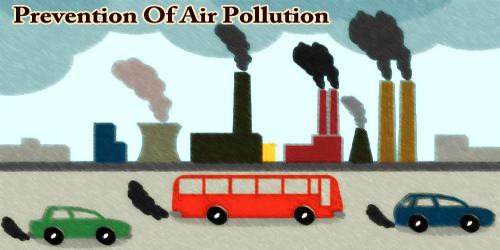 Air pollution can be defined as an alteration of air quality that can be characterized by measurements of chemical, biological or physical pollutants in the air. Therefore, air pollution means the undesirable presence of impurities or the abnormal rise in the proportion of some constituents of the atmosphere. It can be classified in 2 sections: visible and invisible air pollution.

Since the Industrial Revolution, people have been polluting the Earth like never before. There is rarely a place today that has not been subjected to pollutants in one form or another. Some pollution comes in a visible form, like pieces of plastic washed up on our beaches or illegal dumpsites in groves nearby large cities; other pollution comes in a hidden and perhaps even more dangerous form, in the air we breathe daily. Our continuous existence depends on the clean air and yet our activities are constantly releasing extremely toxic particles that contaminate our atmosphere.

Air is considered to be polluted when it contains certain substances in concentrations high enough and for durations long enough to cause harm or undesirable effects. These include adverse effects on human health, property, and atmospheric visibility. The atmosphere is susceptible to pollution from natural sources as well as from human activities. Some natural phenomena, such as volcanic eruptions and forest fires, may have not only local and regional effects but also long-lasting global ones. Nevertheless, only pollution caused by human activities, such as industry and transportation, is subject to mitigation and control.

The issue has become so serious that scientists attribute a large number of deaths to ever increasing effects of air pollution. In fact, polluted air kills each year more people than malaria or tuberculosis. Some cities are even shut down during certain parts of the year because the air is so toxic that it is impossible to function. To imagine the severity of the global pollution even better, there is an animal in the remote Arctic whose body contains one of the highest level of pollutants of any organism on this planet. The word is about a polar bear who is due to the global distillation effect exposed to anthropologically created pollution even in the most remote corner of the planet.

Although increasing number of countries enforce stricter regulations to prevent further emissions of air pollutants, there is still a lot to do on an individual level. The key to have a healthier life is to adopt measures that do not pollute air so much because we all have a role to play when it comes to creating healthy environment for living.

The primary focus of air pollution regulation in industrialized countries has been on protecting ambient, or outdoor, air quality. This involves the control of a small number of specific “criteria” pollutants known to contribute to urban smog and chronic public health problems. The criteria pollutants include fine particulates, carbon monoxide, sulfur dioxide, nitrogen dioxide, ozone, and lead. Since the end of the 20th century, there also has been a recognition of the hazardous effects of trace amounts of many other air pollutants called “air toxics.” Most air toxics are organic chemicals, comprising molecules that contain carbon, hydrogen, and other atoms. Specific emission regulations have been implemented against those pollutants. In addition, the long-term and far-reaching effects of the “greenhouse gases” on atmospheric chemistry and climate have been observed, and cooperative international efforts have been undertaken to control those pollutants. The greenhouse gases include carbon dioxide, chlorofluorocarbons (CFCs), methane, nitrous oxide, and ozone. In 2009 the U.S. Environmental Protection Agency ruled that greenhouse gases posed a threat to human health and could be subject to regulation as air pollutants.

Being aware and changing our habits is the only way to reversing negative actions we have adopted in our modern lifestyles. Even though some initiative needs to be taken by authorities, individual habits still can make a big impact. If not globally, they will make impact locally directly in the environment where you live.

The following list will help us get started with the transition to improving the quality of our life by addressing the problem of air pollution and learning about ways of reducing it.

When we think of air pollution, most of us think of poor outdoor air quality. However, did we know that indoor air is on average two to five times more polluted than outdoor air? This happens because the air circulation indoors is much lower than outdoors, which allows toxins from dust particles, vapors from cooking, painting or furniture dyes to accumulate inside our houses. It is time to have a look at some preventative measures that will teach us how to improve air quality in our home and office.

The best way to protect air quality is to reduce the emission of pollutants by changing to cleaner fuels and processes. Pollutants not eliminated in this way must be collected or trapped by appropriate air-cleaning devices as they are generated and before they can escape into the atmosphere.