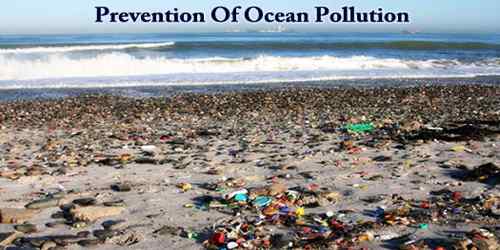 Ocean Pollution, also known as marine pollution, is the spreading of harmful substances such as oil, plastic, industrial, and agricultural waste and chemical particles into the ocean. Since oceans provide the home to a wide variety of marine animals and plants, it is the responsibility of every citizen to play his or her part in making these oceans clean so that marine species can thrive for a long period of time.

The pollution often comes from nonpoint sources such as agricultural runoff, wind-blown debris, and dust. Pollution in large bodies of water can be aggravated by physical phenomena like wind-driven Langmuir circulation and their biological effects. Nutrient pollution, a form of water pollution, refers to contamination by excessive inputs of nutrients. It is a primary cause of eutrophication of surface waters, in which excess nutrients, usually nitrates or phosphates, stimulate algae growth. Many potentially toxic chemicals adhere to tiny particles which are then taken up by plankton and benthic animals, most of which are either deposit feeders or filter feeders. In this way, the toxins are concentrated upward within ocean food chains. Many particles combine chemically in a manner highly depletive of oxygen, causing estuaries to become anoxic.

There are several different preventative measures to help to decrease pollutants. In agriculture, using alternatives to pesticides, such as pheromones or bacteria that detract pests, can reduce chemical runoff that pollutes the ocean. Crop rotation can help reduce the need for fertilizers.

Aside from cleaning up our oceans, which is a very significant first step but not a long-term solution, the best way to address plastic pollution is to change our mindsets and habits with this controversial but nonetheless very useful material:

Solutions for marine pollution include prevention and cleanup. Disposable and single-use plastic is abundantly used in today’s society, from shopping bags to shipping packaging to plastic bottles. Changing society’s approach to plastic use will be a long and economically challenging process. Cleanup, in contrast, may be impossible for some items. Many types of debris (including some plastics) do not float, so they are lost deep in the ocean. Plastics that do float tend to collect in large “patches” in ocean gyres. The Pacific Garbage Patch is one example of such a collection, with plastics and microplastics floating on and below the surface of swirling ocean currents between California and Hawaii in an area of about 1.6 million square kilometers (617,763 square miles), although its size is not fixed. These patches are less like islands of trash and, as the National Oceanic and Atmospheric Administration says, more like flecks of microplastic pepper swirling around an ocean soup. Even some promising solutions are inadequate for combating marine pollution. So-called “biodegradable” plastics often break down only at temperatures higher than will ever be reached in the ocean.

In 2018 a survey of the Global Oceanic Environmental Survey (GOES) Foundation find that the ecosystem in seas and oceans can collapse in the next 25 years what would fail the terrestrial ecosystem and end the life on earth as we know them. The main causes: Plastic pollution, Ocean acidification, Ocean pollution. For prevent that scenario from happening, we need a total single-use plastic ban, ban on wood-burning, planting as many trees as possible, “pollution-free recycling of electronics, and by 2030 all industries to be zero toxic discharge.” “special protection and preservation of peat bogs, wetlands, marshlands, and mangrove swamps to ensure carbon dioxide is absorbed from the atmosphere.” Jellyfish have been considered a potential mitigating organism for pollution.