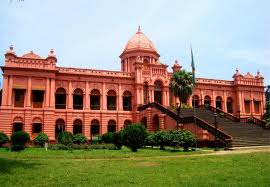 The Ahsan Manzil was built in 1872 by a Kashmiri merchant named Abdul Ghani, who named it for his son Ahsanullah. In 1875, Abdul Ghani was given the title Nawab of Dacca—hereditary after 1875—because of his loyalty to the British in 1857. The golden area for the Nawab family when Nawab Abdul Gani received the ‘Nawab’ title by the British Raj in 1875 and received the title of “King Commander of the order of the Star of India” in 1886. In addition to the vast property he inherited, the favour of the British Raj, had made the Nawab one of the most powerful and influential of Dhaka’s elite. The mentioned palatial mansion, the “Ahsan Manzil” commonly known as the Nawab Bari was a symbol of aristocracy, opulence and influence.

In the midst of a wave of lush green open space against the backdrop of the sky and the sky and the rippling flow of the Buriganga in front stands proudly a stately mansion of the colonial period—the Ahsan Manzil.

This stately monument was heavily damaged in the 1888 tornado but was later reconstructed. The National Museum still preserves a beautiful silver filigree model of the heritage building.

Lord Curzon stayed in this place for sometime as a guest of Nawab Salimullah Bahadoor. He could witness at that time the emergence of Dhaka as the new capital of Eastern Bengal after the first partition in 1905.

Ahsan Manzil was the high point of the old city and it dominated the river front. During the British Raj Dignitaries arriving by luxury boats crossed the promenade and the front court, ascended a grand flight of stairs and entered the palace on the second story. Lord Curzon, Governor General of British India, Stayed here as the Guest of Nawab Sir Salimullah Bahadur in 1904. Important decisions regarding the future of the Muslim movements in India were taken here, which culminated in the formation of the All-India Muslim League.

Because of Muslim emotional attachment to the Palace, its prominence on the river front and its exemplary style of Anglo-Indian Architecture, Ahasan Manzil deserved to be conserved; a decision for its restoration and conversion into a period museum was taken by the Government in April, 1985. Ahsan Manzil situated at Kumartoli of Dhaka on the bank of the Buriganga, was the residentail palace and the kachari of the nawabs of DHAKA. It was said to be the Rang Mahal of Sheikh Enayetullah, a zamindar of Jamalpur pargana (Barisal) during the time of the Mughals. Having purchased it from his son Matiullah, the FRENCH made it their trading centre. Khwaja ALIMULLAH bought it from the French in 1830 and converted it into his residence, effecting necessary reconstruction and renovations. Nawab Khwaja Abdul GHANI engaged Marin & Company, a European construction and engineering firm, to make master plan for their residence.

The construction of the palace was begun in 1859 and completed in 1872. Ahsan Manzil is one of the significant architectural monuments of the country. Established on a raised platform of 1 metre, the two-storied palace measures 125.4m by 28.75m. The height of the ground floor is 5 metres and that of the first floor 5.8 metres. There are porticos of the height of the ground floor, both of the northern and southern sides of the palace. An open spacious stairway has come down from the southern portico, extending upto the bank of the river through the front garden. There was once a fountain in the garden in front of the stairs, though it does not exist today. The spacious north and south verandas of both the floors rest on semicircular arches. The verandas and rooms are covered with marble.

To construct the dome of Ahsan Manzil, the square room on the ground floor was given a round shape with brickwork in the corners. The room was then. given an octagonal shape near the roof by quenches. This octagonal shape took the form of the drum of the dome. Finally, the dumud kali (buds of lotus) shaped dome was constructed by gradually slanting the eight to the peak. The dome is 27.13 m high from the ground.

The stairway leads directly to the projecting grand triple-arched portal of the 1st floor, the central part of which is crowned by a lofty dome. The front fac ade has three projections, the central arched portal projection housing the main entrance through the flight of stairs and two other termination wings at both ends altogether presenting a well balanced architectural composition. The palace is in two symmetrical halves accommodation living quarters of various sizes rooms used for dining and drawing rooms, library and also guestrooms.

On the ground floor there is a spacious darbar hall in the west wing and a grand dining hall in the east. On the east of the 1st floor were the drawing room, library and three guestrooms while the west housed the ballroom and the bedrooms. The arches are all semicircular which conform to the 19th century style.

Internally, the palace is divided into two symmetrical halves on either side of the dome. There is a large draping room in the east wing of the first floor. On its northern side there is a library and a card room, and in the eastern corner there are four square rooms. On the western wing of the first floor there is a spacious Jalsaghar with a Hindustani room on the northern side and four square rooms in the western corner. The vaulted artifical celings, made of wood, in the drawing room and the Jalsaghar, lood very exquisite. The floors of these two rooms are made of wooden planks. On the ground floor there is a big dinning hall and six square rooms in the eastern part. In the western side, there is a gigantic darbar hall and to its north is a billiard room. The floors of the dining and darbar halls are decorated with white, green and yellow coloured ceramic tiles. The famous strong room, where the valuables of the nawabs used to be stored, was in the middle of the five rooms located in the western half of the ground floor.

There are attractive wooden stairs in the room that is attached to the north of the domed room. The balusters were ornamented with vine leaves made of iron along the railing of the stairs. The wooden ceiling of the room, decorated with geometric designs, is very elegant. A visitor’s book bound in gold used to be kept by the stairs during the halcyon days of the nawabs. Distinguished visitors to the palace would note down their observations.

The thickness of the palace is about 0.78 metres. The doorways are placed within semicircular arches.  The inner doors had multi-collured glasses and the exterior ones were of wood with designs. Wooden beams supported the roof of these rooms.

Ahsan Manzil, an architectural treasure, is a witness to many historical events of Bangladesh. From the last part of the 19th century to the initial years of Pakistan, the Muslim leadership of East Bengal emerged from this palace. The nawabs of Dhaka uesed to conduct their court affairs here as chief of the panchayet (village council) everyday. Many anti-Congress meetings were held here under the patronization of Nawab Ahsanullah, a staunch believer in Muslim identity. Almost all the Viceroys, Governors and Lieutenant Governors of British India who visited Dhaka spent some time at the Ahsan Manzil.

Recognising the historical and architectural importance of the Ahsan Manzil, the government of Bangladesh took the initiative it. In 1985 Ahsan Manzil and its surroundings were acquired. After the completion of the renovation work in 1992 under the supervision of the Directorate of Public Works and Architecture, it was brought under the control of BANGLADESH NATIONAL MUSEUM (20 September 1992). A museum has been established there. [Mohammad Alamgir].

Ashan Manzil Museum : On the bank of river Buriganga in Dhaka the Pink majestic Ahsan Manzil has been renovated and turned into a museum recently. It is an epitome of the nation’s rich cultural heritage. It is the home of Nawab of Dhaka and a silent spectator to many events. Today’s renovated Ahsan Manzil a monument of immense historical beauty. It has 31 rooms with a huge dome atop which can be seen from miles around. It now has 23 galleries in 31 rooms displaying of traits, furniture and household articles and utensils used by the Nawab.

Arrayed in large and small plantations placed all over in generous groups and tall palm tress the mansion stands today testifying the splendor and prosperity of the Nawab family that existed and influenced colonial Dhaka. The palace and life in it had been ravaged by the passage of time and history, but after its renovation, has seen a new dawn filled with rays of memories when it had been turned into a museum for its architectural heritage and historic value.

At that time the newly built palace was known as Rang Mahal and the earlier one was called Andar Mahal. On April 7,1888, a terrible tornado caused severe  damage to Ahsan Manzil, particularly the Andar mahal that was entirely damaged. Nawab Ahsanullah rebuilt the Andar Mahal and also repaired the Rang Mahal using good quality bricks from Raniganj for this purpose. The exquisite dome of the present Rang Mahal was interposed. Ahsan Mazil was badly damaged again by the earthquake of 12 June 1897. However, Nawab Ahsanullah bad it repaired again.