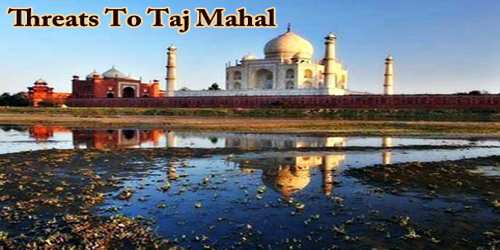 The historical Taj Mahal stands on the south bank of the Jamuna at Agra, India. It was built by the Mughal Emperor Shah Jahan in memory of his beloved wife, Mumtaz Mahal. It took twenty thousand workmen, twenty two years to complete the building.

The Taj Mahal is made of pure white marble. It has four minarets at each end and a big dome at the center. The main building stands over a basement in a rectangular shape. The remains of Shah Jahan and Mumtaz Mahal lie buried under it. There is a park in front of it. The fountains and multi-colored flowers add to the beauty of the palace. Designated a UNESCO World Heritage site in 1983, it remains one of the world’s most celebrated structures and a stunning symbol of India’s rich history.

In 1942, the government erected scaffolding to disguise the building in anticipation of air attacks by the Japanese Air Force. During the India-Pakistan wars of 1965 and 1971, scaffolding was again erected to mislead bomber pilots.

More recent threats have come from environmental pollution on the banks of the Yamuna River including acid rain due to the Mathura Oil Refinery, which was opposed by Supreme Court of India directives. The pollution has been turning the Taj Mahal yellow-brown. To help control the pollution, the Indian government has set up the “Taj Trapezium Zone (TTZ)”, a 10,400-square-kilometre (4,000 sq mi) area around the monument where strict emissions standards are in place.

Acid rain is caused by emissions of sulfur dioxide and nitrogen oxide, which react with the water molecules in the atmosphere to produce acids. Acid rain corrodes the marble (calcium carbonate) of Taj Mahal. It causes damage to this wonderful structure, causing the yellowing of marble.

Concerns for the tomb’s structural integrity have recently been raised because of a decline in the groundwater level in the Yamuna river basin which is falling at a rate of around 1.5 m (5 ft) per year. In 2010, cracks appeared in parts of the tomb, and the minarets which surround the monument were showing signs of tilting, as the wooden foundation of the tomb may be rotting due to lack of water. It has been pointed out by politicians, however, that the minarets are designed to tilt slightly outwards to prevent them from crashing on top of the tomb in the event of an earthquake. In 2011, it was reported that some predictions indicated that the tomb could collapse within five years.

The Archaeological Survey of India (ASI) is concerned about the bug threat, but its officials said that their purview is limited within the walls of the monument. The insect attack is largely concentrated within a radius of 500 meters, including the back of the Taj (which is the worst affected), and partially on the sides facing the Mosque and that of Mehmaankhaana (royal guest house).

A series of marble panels depicting plant motifs on the walls or reflective tiles used in this part of the monument are getting disfigured by such bug related depositions. Dr. Girish Maheshwari, Head of the Department of Entomology at St John’s College in Agra, said the feasible solution lies in the “prevention of eutrophication of the water and the sediments of the river Yamuna near the Taj Mahal”.

Small minarets located at two of the outlying buildings were reported as damaged by a storm on April 11, 2018. On 31st May 2020, another fierce thunderstorm caused some damage to the complex.