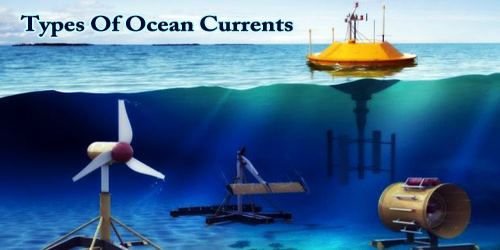 Ocean currents are the movements of ocean water due to gravity, the rotating earth (Coriolis Effect), water density, the sun, and wind. The various forces determine the size, speed direction, and shape of ocean currents. The water can either move horizontally known as currents or vertically known as downwellings or upwellings.

Ocean water is on the move, affecting our climate, our local ecosystem, and the seafood that we eat. Ocean currents, abiotic features of the environment, are continuous and directed movements of ocean water. These currents are on the ocean’s surface and in its depths, flowing both locally and globally.

Surface Currents – Large-scale surface ocean currents are driven by global wind systems that are fueled by energy from the sun. These currents transfer heat from the tropics to the polar regions, influencing local and global climate. The warm Gulf Stream originating in the tropical Caribbean, for instance, carries about 150 times more water than the Amazon River. The current moves along the U.S. East Coast across the Atlantic Ocean towards Europe. The heat from the Gulf Stream keeps much of Northern Europe significantly warmer than other places equally as far north.

Deep-water Currents – As opposed to surface currents that occur on the upper surface of the ocean, deep-water currents occur deep inside the ocean. As they occur far below the surface, they are not influenced by the wind.

However, they arise as a result of variation in the density of the ocean water and are controlled by the temperature and salt content of the water.

In cold regions, such as the North Atlantic Ocean, ocean water loses heat to the atmosphere and becomes cold and dense. When ocean water freezes, forming sea ice, salt is left behind causing surrounding seawater to become saltier and denser. Dense-cold-salty water sinks to the ocean bottom. Surface water flows in to replace the sinking water, which in turn becomes cold and salty enough to sink. This “starts” the global conveyer belt, a connected system of deep and surface currents that circulate around the globe on a 1000 year time span. This global set of ocean currents is a critical part of Earth’s climate system as well as the ocean nutrient and carbon dioxide cycles.

Upwelling – Upwelling currents are currents that move from deep in the ocean heading towards the surface. They are responsible for bringing organic matter from below the ocean towards its surface.

For instance, they sweep nutrients upwards, helping some marine life. It can be seen when there are tremors or earthquakes on the surface below the ocean and the waves are pushed upwards.

In Antarctica, upwelling currents pump nitrogen and phosphates up from the deep sea to blooms of algae and other plants. The planktons can then be eaten by crustaceans called krill, which in turn are eaten by penguins, seabirds, seals, and the baleen whales, the largest animals on earth.

Down-welling – These are currents that move material from the surface of the ocean towards its floor. Surface water can be forced downwards by the pressure of the water when currents converge or wind drives the ocean against a coastline. It is important as the dissolved oxygen in the sediments and water below would quickly be used up by the decay of organic matter.

Additionally, anaerobic bacteria would take control of decomposition, contributing to a build-up of hydrogen sulfide and only a handful of benthic animals would survive such toxic conditions.

An ocean current flows for great distances and together they create the global conveyor belt, which plays a dominant role in determining the climate of many of Earth’s regions. More specifically, ocean currents influence the temperature of the regions through which they travel.

For example, warm currents traveling along more temperate coasts increase the temperature of the area by warming the sea breezes that blow over them. Perhaps the most striking example is the Gulf Stream, which makes northwest Europe much more temperate than any other region at the same latitude. Another example is Lima, Peru, where the climate is cooler, being sub-tropical than the tropical latitudes in which the area is located, due to the effect of the Humboldt Current.