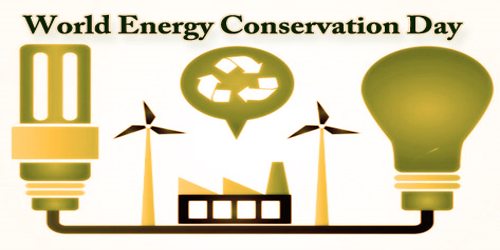 World Energy Conservation Day is celebrated on 14th December every year since 1991, globally to highlight the importance of energy consumption and its use in our day-to-day life, its scarcity and its impact on sustainability of global eco systems. 150 countries, 5200 cities and millions of people around the world will be celebrating in the universal initiative for energy conservation, global warming and climate. This Day serves to focus the attention of decision makers in directing resources towards energy generation through non-conventional sources on a larger scale. Non-conventional sources of energy such as wind, hydel (large, mini and micro), biomass, biogas, biodiesel, geothermal, tidal, solar, nuclear fusion have the potential for being the future sources of carbon neutral energy. Barring hydel and wind, the cost for all the other forms of energy generation is still quite high.

It is a day for building up awareness regarding –

Energy use is a major source of global warming, which has the potential of making the earth uninhabitable. As we all aware of the threatening fact that reserves of all conventional forms of energy are fast depleting. Every day the human population across the world uses energy for leading a civilized life. These resources are critical input of human development which comprises providing adequate food, shelter, clothing, water, sanitation, medication, schooling, transportation, industrial applications, access to information, etc. In short, energy affects all facets of activities related to everyday and modern life. Per capita energy consumption is often considered an important indicator of development. As people and nation’s progress, consumption of energy will increase.

Energy Conservation shows a chain cycle of converting different forms of energy into heat and power:

We utilize energy in different forms in our daily routine life and cannot think even about to survive without it. We use energy to light our homes and for street lighting as well, to be able to power machineries and equipments in factories, helps to cook our food, for playing music and operating televisions and many more every day regular uses.

Energy Tax – Some countries employ energy or carbon taxes to motivate energy users to reduce their consumption. Carbon taxes can motivate consumption to shift to energy sources with less emissions of carbon dioxide, such as solar power, wind power, hydroelectricity or nuclear power while avoiding cars with combustion engines, jet fuel, oil, fossil gas and coal. On the other hand, taxes on all energy consumption can reduce energy use across the board while reducing a broader array of environmental consequences arising from energy production. The state of California employs a tiered energy tax whereby every consumer receives a baseline energy allowance that carries a low tax. As usage increases above that baseline, the tax increases drastically. Such programs aim to protect poorer households while creating a larger tax burden for high energy consumers.

The most important and popularly known sources of energy are –

These resources of commercial energy are available only in limited quantities. At current reserve to production ratio, oil is expected to last around 45 years, gas around 65 years, coal around 200 years. (Source: BP Statistical Review of world Energy, 2010). The above timelines demonstrate the need for urgent world action for funding research and development of alternate energy sources, which are affordable, available in adequate quantity and perennial in nature. The need for energy conservation and economical use of energy arises basically because of its features of universal usage, fast depleting resource and impact on climate change.

Importance of Energy Conservation – Energy affects all facets of activities related to modern life. Per capita energy consumption is often considered an important indicator of development. Conventional sources of commercial energy comprising of petroleum products, coal, and nuclear energy are available only in limited quantities. At current reserve to production ratio, oil is expected to last around 45 years, gas around 65 years, coal around 200 years.

A total of 1.6 billion people in the world lack access to electricity. Energy conservation can significantly reduce the need for fresh investment in energy supply systems in coming years. Energy conservation is an objective to which all the citizen in the country can contribute. Whether a household or a factory, a small shop or a large commercial building, a farmer or an office worker, every user and producer of energy can and must make this effort for his own benefit, as well as that of the nation.

Energy Management: Human beings like to believe they are in control of their destiny, but when the history of life on Earth is seen in perspective, the evolution of Homo sapiens is merely a transient episode that acts to redress the planet’s energy balance. The production of electricity from nuclear fission has been increasing, but nuclear sources still supply only about 5.2% of the world’s total energy needs. Public confidence in all types of reactors is low, and the cost of their construction is high. These social constraints make it unlikely that fission’s contribution to the world’s energy needs will grow fifteen-fold in the next few years.

While no single energy source is ready to take the place of fossil fuels, their diminishing availability may be offset by a regimen of conservation and a combination of alternative energy sources. This will not solve the problem, however. As long as population continues to grow, conservation is futile; at the present rate of growth (1.6% per year), even a 25% reduction in resource use would be obliterated in just over eighteen years. And the use of any combination of resources that permits continued population growth can only postpone the day of reckoning.

World Energy Conservation Day is a big opportunity to help in taking following initiatives: Being a civilized nation, we should focus on attention of decision makers (Government and Private sector) in directing resources towards energy generation through non-conventional sources on a larger scale.