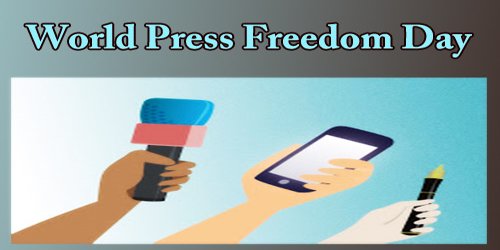 World Press Freedom Day or just “World Press Day” is annually observed on 3rd May to inform the international community that freedom of the press and freedom of expression are fundamental human rights. The day was proclaimed by the UN General Assembly in December 1993, following the recommendation of UNESCO’s General Conference. This day reminds people that many journalists brave death or face jail to bring daily news to the public.

World Press Freedom Day gives people the prospect to pay tribute to media professionals who risked or lost their lives within the line of duty. Many communities, organizations, and individuals participate during this day through various events like art exhibitions, dinners featuring keynote speakers, and awards nights to honor people who risked their lives to bring news to the world.

This day observed to raise awareness of the importance of freedom of the press and remind governments of their duty to respect and uphold the right to freedom of expression enshrined under Article 19 of the 1948 Universal Declaration of Human Rights and marking the anniversary of the Windhoek Declaration, a statement of free press principles put together by African newspaper journalists in Windhoek in 1991.

May 3 acts as a reminder to governments of the need to respect their commitment to press freedom. It is also a day of reflection among media professionals about issues of press freedom and professional ethics. It is an opportunity to:

The day was established by the General Assembly of the United Nations in December 1993 as an outgrowth of the Seminar on Promoting an Independent and Pluralistic African Press. This seminar took place in Namibia in 1991 and led to the adoption of the Windhoek Declaration on Promoting Independent and Pluralistic Media. The Windhoek Declaration called to establish, maintain, and foster an independent, pluralistic, and free press. It emphasized the importance of a free press for developing and maintaining democracy during a nation, and for economic development. World Press Freedom Day is widely known annually on May 3, the date on which the Windhoek Declaration was adopted.

The Prize (The UNESCO/Guillermo Cano World Press Freedom Prize) is named in honor of Guillermo Cano Isaza, a Colombian journalist who was assassinated in front of the offices of his newspaper, El Espectador, in Bogotá, on 17th December 1986. Cano’s writings had offended Colombia’s powerful drug barons.

UNESCO also marks World Press Freedom Day each year by bringing together media professionals, press freedom organizations, and UN agencies to assess the state of press freedom worldwide and discuss solutions for addressing challenges. Each conference is centered on a theme related to press freedom, including good governance, media coverage of terrorism, impunity, and the role of media in post-conflict countries.