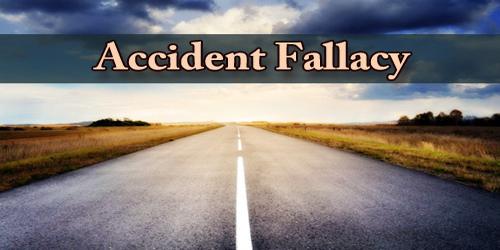 The Accident Fallacy, which is also called destroying the exception or a dicto simpliciter ad dictum secundum quid, is an error in reasoning caused by sweeping generalizations. It occurs when we assume that a rule-of-thumb applies to everyone or every situation, including obvious exceptions. While generalizing helps make the world easier to understand, often generalizations do not apply to every situation. An accident fallacy is using such a generalization to draw an incorrect conclusion about an obvious exception.

The Accident fallacy is a deductively valid but unsound argument occurring in a statistical syllogism (an argument based on a generalization) when an exception to a rule of thumb is ignored. It is one of the thirteen fallacies originally identified by Aristotle in Sophistical Refutations. The fallacy occurs when one attempts to apply a general rule to an irrelevant situation.

A good example of an accident fallacy could be assuming that ‘birds can fly’ applies to all birds, and therefore arguing, or even just believing, that a penguin can fly. While the statement that birds can fly is not false because most birds can fly penguins are an exception. Penguins are among the limited number of flightless birds and it would be logically fallacious to conclude otherwise based on the premise ‘birds can fly.’

It is easy to construct fallacious arguments by applying general statements to specific incidents that are obviously exceptions. Generalizations that are weak generally have more exceptions (the number of exceptions to the generalization need not be a minority of cases) and vice versa.

This fallacy may occur when we confuse particulars (“some”) for categorical statements (“always and everywhere”). It may be encouraged when no qualifying words like “some”, “many”, “rarely” etc. are used to mark the generalization.

Example in Health: Another statement that could fall victim to the accident fallacy is that exercise is good for you. In most cases, that’s true. People benefit from staying active and regularly exercising. However, if we are very sick, say we have pneumonia, we shouldn’t be exercising. In this case, we should be resting and allowing our bodies to recover. It would be an accident of fallacy if we were told it would be good for us to go exercise while suffering from pneumonia.

Explanation and Exception: To assume any law, even divine, applies to every person, in every time, in every situation, even though not explicitly stated, is an assumption not grounded in evidence, and fallacious reasoning.

Stating the general rule when a good argument can be made that the action in question is a violation of the rule, would not be considered fallacious.

Speeding on the roads is illegal

The police can legally speed in an emergency

I can legally speed if it’s an emergency

God did evil things in pursuit of doing good, and still, be good

I’m trying to do good

I can do evil things while still being good

Avoid an Accident Fallacy: Avoiding an accident of fallacy requires that you think critically about generalized statements. Do not accept them at face value; be sure to really think about whether they apply to the situation we are evaluating. Most, even perhaps all, generalized statements have exceptions.  Don’t assume a general statement is always true unless we have proved it.