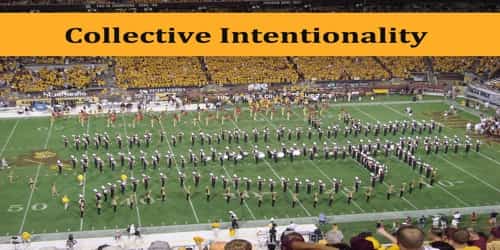 In the 20th century, the likes of Wilfrid Sellars and Anthony Quinton noted the existence of “We-Intentions” amid broader discussion of the concept of intentionality, and thus laid the groundwork for the focused philosophical analysis of collective intentionality that began in the late 1980s.

Collective acceptance is a central presupposition for the creation of a language, and of a whole world of symbols, institutions, and social status. Shared evaluative attitudes provide us with a conception of the common good. In virtue of this, we can reason from the perspective of our groups, and conceive of ourselves in terms of our social identities and social roles. This again enables us to constitute group agents such as business enterprises, universities, or political parties.

The main philosophical challenge connected with the analysis of collective intentionality is in the tension within the expression “individuals as a group”. It can be spelled out as a contradiction between the following two widely accepted claims (the Central Problem):

Contemporary philosophical discussion of collective intentionality was initiated by Raimo Tuomela and Kaarlo Miller’s “We-Intentions”. In this paper, Tuomela and Miller assert three conditions necessary for a collective intention, highlighting the importance of beliefs among the agents of the group. After citing examples that are commonly accepted as requiring more than one member to participate (carrying a table upstairs, playing tennis, toasting to a friend, conversing, etc.), they state their criteria:

A member (A) of a collective (G) we-intends to do a group action (X) if and only if:

John Searle’s 1990 paper, “Collective Intentions and Actions” offers another interpretation of collective action. In contrast to Tuomela and Miller, Searle claims that collective intentionality is a “primitive phenomenon, which cannot be analyzed as the summation of individual intentional behavior”. He exemplifies the fundamental distinction between “I-intentions” and “We-intentions” by comparing the hypothetical case of a set of picnickers and a dance troupe.