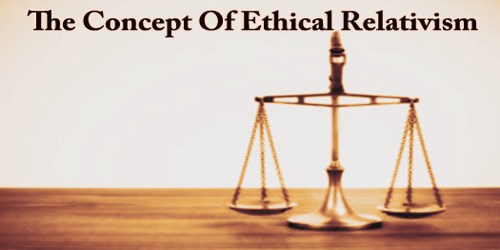 The Concept Of Ethical Relativism

The concept of ethical relativism revolves around the fact that different groups have different ethical standards in determining what is morally right and wrong, and their beliefs stand true to that particular group even when it may not be a basic moral principle. While some people are of the opinion that fundamental principles of ethics are more important, ethical relativists seem to be least impressed by their opinion. On the contrary, they believe that morality is a mere social invention, which can vary from one group to another.

There are two versions of Ethical Relativism (E.R.):

Individual or Personal Ethical Relativism: Ethical statements are relative to the individual.

I have my ethical views and you have yours, neither my views nor your views are better or more correct. In a sense we are all equally correct, insofar as whatever we believe is true, or looked at differently, the idea of being more or less correct doesn’t apply to moral beliefs, since that would assume that there is some objective standard of right or wrong, independent of what I might believe which would serve as a standard of judgment, but that is exactly what relativism denies. This is sometimes called ethical subjectivism.

Right and wrong simply IS what a given society says it is. And although a society may believe that its views are the correct ones, cultural ethical relativism insists that no society’s views are better or more moral that any other society’s beliefs. For the same reason stated above, there is no objective standard independent of what a society actually believes against which its views might be evaluated.

Herodotus, the Greek historian of the 5th century BC, advanced this view when he observed that different societies have different customs and that each person thinks his own society’s customs are best. But no set of social customs, Herodotus said, is really better or worse than any other. Some contemporary sociologists and anthropologists have argued along similar lines that morality, because it is a social product, develops differently within different cultures. Each society develops standards that are used by people within it to distinguish acceptable from unacceptable behavior, and every judgment of right and wrong presupposes one or another of these standards. Thus, according to these researchers, if practices such as polygamy or infanticide are considered right within a society, then they are right “for that society”; and if the same practices are considered wrong within a different society, then those practices are wrong for that society. There is no such thing as what is “really” right, apart from these social codes, for there is no culture-neutral standard to which we can appeal to determine which society’s view is correct. The different social codes are all that exist.

A second type of argument for ethical relativism is due to the Scottish philosopher David Hume (1711–76), who claimed that moral beliefs are based on “sentiment,” or emotion, rather than on reason. This idea was developed by the 20th-century school of logical positivism and by later philosophers such as Charles L. Stevenson (1908–79) and R.M. Hare (1919–2002), who held that the primary function of moral language is not to state facts but to express feelings of approval or disapproval toward some action or to influence the attitudes and actions of others. On this view, known as emotivism, right and wrong are relative to individual preferences rather than to social standards.

The Diversity of Moral Views: The actual fact that People and Societies have and continue to disagree about the moral issues, they continue to hold different moral beliefs. For a Relativist, this fact is best explained by and is therefore evidence for E.R.; otherwise we would expect to find considerable moral agreement.

Moral Uncertainty: Despite our best efforts, we are often uncertain about what is the right thing to do, especially in the context of a dilemma, our judgment seems to be very subjective, a matter of personal opinion. There seems to be no decisive way to settle many moral disputes, in contrast with factual disputes. Relativism based on epistemic uncertainty and/or skepticism.

In sum, the fact that I do not know for certain in a given situation what is right implies that there is no objective standard; hence morality is relative and subjective.

Situational Differences: The actual situation in which people live are often very different, it is implausible to believe that there could be one set of moral principles or rules that are universally true for all persons at all times.

In sum, given the many differences in particular circumstances, what we all morality must be relative to the particular situation and no objective or universally valid moral norms exist.

Toleration of Differences: People from different cultures have different moral beliefs, one ought to tolerate, i.e., not be critical of, these beliefs. One ought not to think that one view is better or more correct than another, hence one should adopt ethical relativism, which entails that all moral beliefs are equally correct.

In sum, Ethical Relativism promotes Tolerance for differences and/or Tolerance is consistent with ethical relativism.

Ethical relativism is attractive to many philosophers and social scientists because it seems to offer the best explanation of the variability of moral belief. It also offers a plausible way of explaining how ethics fits into the world as it is described by modern science. Even if the natural world ultimately consists of nothing but value-neutral facts, say the relativists, ethics still has a foundation in human feelings and social arrangements. Finally, ethical relativism seems especially well suited to explain the virtue of tolerance. If, from an objective point of view, one’s own values and the values of one’s society have no special standing, then an attitude of “live and let live” toward other people’s values seems appropriate.

When it comes to ‘anthropology’ (i.e., the study of origins and social relationships of human beings), ‘ethnocentrism’ (i.e., the belief that our own way of life is better than that of others) can influence the results, and therefore, is best avoided. In order to make sure that there is no bias, one has to take the insider’s as well as the neutral outsider’s point of view into consideration when portraying the society. Now that may seem ideal when it comes to safe topics, but in case of topics such as polygamy and racism, which are accepted in some societies and condemned in other, it can spark controversies. At the end of the day, we can’t ignore the fact that there do exist some conflicting ethical opinions which are equally valid. Such differences in moral practices tend to hint at the need of ethical relativism.

Simply put the opinion on whether an action is morally right or morally wrong will differ from one society to another, and/or one individual to another. One of the best examples of this concept is polygamy, i.e., having more than one spouse at a time. While polygamy is accepted in quite a few communities and nations across the world, it is considered ethically and legally wrong in other communities and nations. Similarly, in some ancient communities, it was a common practice to kill elders after a certain age, as it was believed that dying while they were physically active would help them in their afterlife. Such examples were quite common in the past.

Ethical relativism, then, is a radical doctrine that is contrary to what many thoughtful people commonly assume. As such, it should not be confused with the uncontroversial thought that what is right depends on the circumstances. Everyone, absolutists and relativists alike, agrees that circumstances make a difference. Whether it is morally permissible to enter a house, for example, depends on whether one is the owner, a guest, or a burglar. Nor is ethical relativism merely the idea that different people have different beliefs about ethics, which again no one would deny. It is, rather, a theory about the status of moral beliefs, according to which none of them is objectively true. A consequence of the theory is that there is no way to justify any moral principle as valid for all people and all societies.

Critics have lodged a number of complaints against this doctrine. They point out that if ethical relativism is correct, it would mean that even the most outrageous practices, such as slavery and the physical abuse of women, are “right” if they are countenanced by the standards of the relevant society. Relativism therefore deprives us of any means of raising moral objections against horrendous social customs, provided that those customs are approved by the codes of the societies in which they exist.

Critics also point out that disagreement about ethics does not mean that there can be no objective truth. After all, people disagree even about scientific matters. Some people believe that disease is caused by evil spirits, while others believe it is caused by microbes, but we do not on that account conclude that disease has no “real” cause. The same might be true of ethics disagreement might only mean that some people are more enlightened than others.

But there is actually far less disagreement than the relativists imply. Anthropologists have observed that, while there is some variation from culture to culture, there are also some values that all societies have in common. Some values are, in fact, necessary for society to exist. Without rules requiring truthfulness, for example, there could be no communication, and without rules against murder and assault, people could not live together. These are, not surprisingly, among the values that anthropologists find wherever they look. Such disagreements as do exist take place against a background of agreement on these large matters.

Lastly, to the claim that there is no legitimate way to judge a society’s practices “from the outside,” critics may reply that we can always ask whether a particular cultural practice works to the advantage or disadvantage of the people within the culture. If, for example, female genital mutilation does more harm than good for the members of the societies that practice it, that fact may be an objective reason for judging the practice to be bad. Thus the appeal to what is helpful or harmful appears to be a standard that transcends local disagreements and variations.

As in case of any other concept, even ethical relativism has its own positives and negatives, which have to be evaluated to determine whether the entire concept really holds ground or not. One of the most prominent advantages of this concept is the fact that it helps different cultures co-exist without any clashes whatsoever. At the same time, it also facilitates adaptation in a society which is prone to changes. The critics argue that even if moral practices differ from one society to another, the underlying fundamental principles don’t, and a practice which is wrong is morally wrong, irrespective of which society it is.

Going by this, it wouldn’t be wrong to conclude that ethical relativism is a theory which highlights the fact that morals differ from one group to another, and denies the basic existence of universal morals.