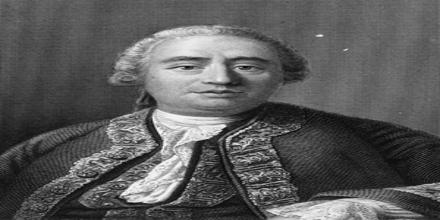 David Hume, Philosopher, Historian, Economist, and Essayist  was born 7 May NS (26 April OS) 1711 Edinburgh, Scotland, Great Britain. Hume conceived of philosophy as the inductive, experimental science of human nature. Hume tried to describe how the mind works in acquiring what is called knowledge. He concluded that no theory of reality is possible; there can be no knowledge of anything beyond experience. Hume attended the University of Edinburgh at the unusually early age of twelve at a time when fourteen was normal. He made a philosophical discovery that opened up to him “a new Scene of Thought”, which inspired him “to throw up every other Pleasure or Business to apply entirely to it” when he was 18. At 25 years of age, Hume, although of noble ancestry, had no source of income and no learned profession. He worked for four years on his first major work, A Treatise of Human Nature, subtitled “Being an Attempt to Introduce the Experimental Method of Reasoning into Moral Subjects”, completing it in 1738 at the age of 28. After the publication of Essays Moral and Political in 1744, which was included in the later edition called Essays, Moral, Political, and Literary, Hume applied for the Chair of Pneumatics and Moral Philosophy at the University of Edinburgh. However, the position was given to William Cleghorn after Edinburgh ministers petitioned the town council not to appoint Hume because he was seen as an atheist.