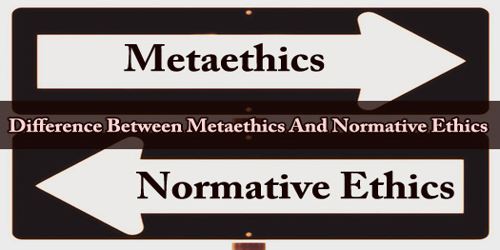 Difference Between Metaethics And Normative Ethics

The word ‘ethics’ signifies a moral ground, an existence based on morals and principles and values. It lays down the foundation for the basic code of conduct. There are two main branches of ethics, metaethics and normative ethics. When we talk about ‘being ethical’ or ‘he is an ethical person’, we talk about the rules he has laid down for himself, and how sincerely he follows them. This is the layman’s perspective.

It is a general viewpoint to follow certain regulations, to state some actions as good and some as bad, to live in a civilized society. But, ethics comprise further discussion about different reactions and beliefs in different situations, since a person changes as per circumstances.

Metaethics talks about the nature of ethics and moral reasoning. Discussions about whether ethics is relative and whether we always act from self-interest are examples of meta-ethical discussions. In fact, drawing the conceptual distinction between Metaethics, Normative Ethics, and Applied Ethics is itself a “metaethical analysis.”

A philosophical study of morality is very different from a sociological or anthropological study, or a study from the perspective of biology or psychology. One important difference is that in moral philosophy we do not distance ourselves from our own moral views in the way we would if we were engaged in a study of one of these other kinds. We do not take the fact that people, including ourselves, have moral views as merely a datum to be explained. Our goal is not merely to explain data of this kind, whether it be the distribution of moral beliefs and attitudes or the occurrence of selfish or altruistic actions. Rather, in moral philosophy, the correctness or cogency or defensibility of moral claims, convictions, and attitudes, and the probity of various behaviors, are among the things at issue. Normative ethics makes moral claims in its own right. Metaethics does not do this, yet, despite this, it is morally engaged. For among its central questions are the questions whether any moral claims are true, and whether it is rational to commit oneself to acting morally. One cannot answer such questions without taking a position on the correctness or cogency of people’s moral convictions.

Normative ethics is interested in determining the content of our moral behavior. Normative ethical theories seek to provide action-guides; procedures for answering the Practical Question (“What ought I to do?”). The moral theories of Kant and Bentham are examples of normative theories that seek to provide guidelines for determining a specific course of moral action. Think of the Categorical Imperative in the case of the former and the Principle of Utility in the case of the latter.

Consideration Factors of Normative Ethics: Normative ethics helps decide the good and bad, thus, we have two types of normative, moral judgments. One of them can be made based on actions, behavior, and commitment, while the other can be made depending on your emotions, thoughts, hopes, and desires.

Applied Ethics attempts to deal with specific realms of human action and to craft criteria for discussing issues that might arise within those realms. The contemporary field of Applied Ethics arouse in the late 1960s and early 1970s. Today, it is a thriving part of the field of ethics. Numerous books and websites are devoted to topics such as Business Ethics, Computer Ethics, and Engineering Ethics.