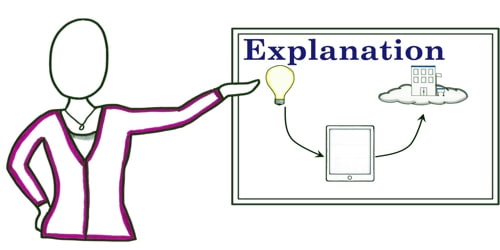 Introduction: Explanation, in philosophy, a set of statements that makes intelligible the existence or occurrence of an object, event, or state of affairs. It is a set of statements usually constructed to describe a set of facts which clarifies the causes, context, and consequences of those facts. The components of an explanation can be implicit and interwoven with one another.

Most people, philosophers included, think of explanation in terms of causation. Very roughly, to explain an event or phenomenon is to identify its cause. The nature of causation is one of the perennial problems of philosophy, so on the basis of this connection, one might reasonably attempt to trace thinking about the nature of explanation to antiquity.

An explanation is often underpinned by an understanding or norm that can be represented by different media such as music, text, and graphics. Thus, an explanation is subjected to interpretation and discussion.

Arguments: While arguments attempt to show that something is, will be or should be the case, explanations try to show why or how something is or will be. Arguments and explanations largely resemble each other in rhetorical use. This is the cause of much difficulty in thinking critically about claims.

There are several reasons for this difficulty.

According to Hempel, an explanation is:

…an argument to the effect that the phenomenon to be explained …was to be expected in virtue of certain explanatory facts.

Hempel claimed that there are two types of explanation, what he called ‘deductive-nomological’ (DN) and ‘inductive-statistical’ (IS) respectively.” Both IS and DN arguments have the same structure.

Another important criticism of Hempel’s theory is that many DN arguments with true premises do not appear to be explanatory.

Justification: Justification is the reason why someone properly holds a belief, the explanation as to why the belief is a true one or an account of how one knows what one knows. In much the same way arguments and explanations may be confused with each other, so too may explanations and justifications. Statements which are justifications of some action take the form of arguments. For example, attempts to justify a theft usually explain the motives (e.g., to feed a starving family).

The Current State of the Theory of Explanation: Most philosophers of science would agree that our understanding of explanation is far better now than it was in 1948 when Hempel and Oppenheim published “Studies in the Logic of Explanation.” While it serves expository purposes to represent the DN model and each of its successors as fatally flawed, this should not obscure the fact that these theories have brought real advances in understanding which succeeding models are required to preserve.

Fortunately, however, the significance of further research into the logical and cognitive structure of explanation does not depend on their outcome.