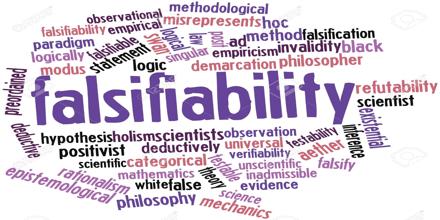 Falsifiability is the belief that for any hypothesis to have credence, it must be inherently disprovable before it can become accepted as a scientific hypothesis or theory. Falsifiability as a black and white definition, that if a theory is falsifiable, it is scientific, and if not, then it is unscientific. Karl Popper famously suggested the criterion of “falsifiability”—a theory is scientific if it makes clear predictions that can be unambiguously falsified. It criterion gestures toward something true and important about science, but it is a blunt instrument in a situation that calls for subtlety and precision. It is better to emphasize two more central features of good scientific theories: they are definite, and they are empirical.