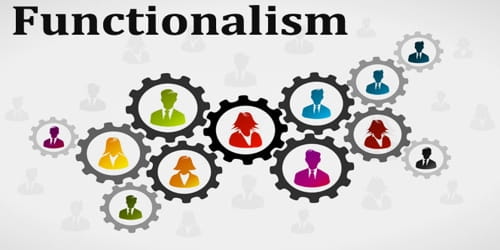 Functionalism in the philosophy of mind is the doctrine that what makes something a mental state of a particular type does not depend on its internal constitution, but rather on the way it functions, or the role it plays, in the system of which it is a part. Functionalism developed largely as an alternative to the identity theory of mind and behaviorism. This doctrine is rooted in Aristotle’s conception of the soul, and has antecedents in Hobbes’s conception of the mind as a “calculating machine”, but it has become fully articulated (and popularly endorsed) only in the last third of the 20th century.

“Functionalist theory is the concept that everything in society has a function. When one function fails, the rest of the functions within society are all interrupted. According to functionalism, society is a system of interconnected parts that work together in harmony to maintain a state of balance and social equilibrium for the whole.” For (an avowedly simplistic) example, a functionalist theory might characterize pain as a state that tends to be caused by bodily injury, to produce the belief that something is wrong with the body and the desire to be out of that state, to produce anxiety, and, in the absence of any stronger, conflicting desires, to cause wincing or moaning. According to this theory, all and only creatures with internal states that meet these conditions, or play these roles, are capable of being in pain.

An important part of some accounts of functionalism is the idea of multiple realizability. Since, according to standard functionalist theories, mental states are the corresponding functional role, mental states can be sufficiently explained without taking into account the underlying physical medium (e.g. the brain, neurons, etc.) that realizes such states; one need only take into account the higher-level functions in the cognitive system.

However, there have been some functionalist theories that combine with the identity theory of mind, which deny multiple realizability. Such Functional Specification Theories (FSTs) (Levin, § 3.4), as they are called, were most notably developed by David Lewis and David Malet Armstrong.

Functionalism has three distinct sources. First, Putnam and Fodor saw mental states in terms of an empirical computational theory of the mind. Second, Smart’s “topic-neutral” analyses led Armstrong and Lewis to a functionalist analysis of mental concepts. Third, Wittgenstein’s idea of meaning as use led to a version of functionalism as a theory of meaning, further developed by Sellars and later Harman.

Functionalism emphasizes that consensus must exist in the society, social stability is acquired and shared values are held. Therefore any disorganization in the system is perceived to be unorthodox behavior, and leads to change of the adjustments that need to be made to achieve initial social stability, “When one part of the system is not working or is dysfunctional, it affects all other parts and creates social problems, which leads to social change”.