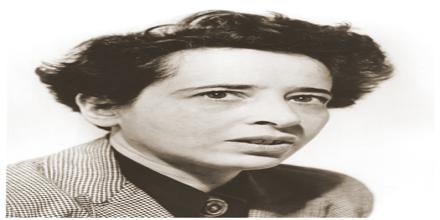 Hannah Arendt, Philosopher and Political Theorist was born 14 October 1906 Linden, German Empire (present-day Hanover, Germany). In 1922-23, Arendt began her studies (in classics and Christian theology) at the University of Berlin, and in 1924 entered Marburg University, where she studied philosophy with Martin Heidegger. She was Jewish and escaped Europe during the Holocaust, becoming an American citizen. Her works deal with the nature of power, and the subjects of politics, direct democracy, authority, and totalitarianism. The Hannah Arendt Prize is named in her honor. During World War II, Arendt worked for Youth Aliyah, a Zionist organization, which saved thousands of children from the Holocaust and settled them in the British Mandate of Palestine. In 1958, she published The Human Condition and Rahel Varnhagen: The Life of a Jewess. In 1959, she published “Reflections on Little Rock,” her controversial consideration of the emergent Black civil rights movement. In 1961, she published Between Past and Future, and traveled to Jerusalem to cover the trial of Nazi Adolf Eichmann for the New Yorker. Hannah Arendt is a most challenging figure for anyone wishing to understand the body of her work in political philosophy. She never wrote anything that would represent a systematic political philosophy, a philosophy in which a single central argument is expounded and expanded upon in a sequence of works. She was elected a fellow of the American Academy of Arts and Sciences in 1962 and a member of the American Academy of Arts and Letters in 1964.