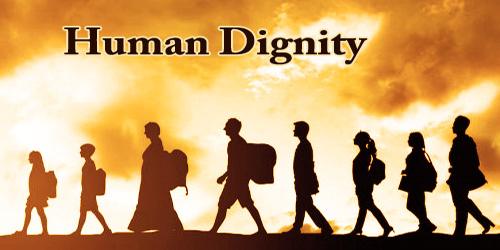 The concept of human dignity is the belief that all people hold a special value that’s tied solely to their humanity. It has nothing to do with their class, race, gender, religion, abilities, or any other factor other than them being human.

Dignity is the right of a person to be valued and respected for their own sake and to be treated ethically. It is of significance in morality, ethics, law, and politics as an extension of the Enlightenment-era concepts of inherent, inalienable rights. The term may also be used to describe personal conduct, as in “behaving with dignity”. The English word “dignity”, attested from the early 13th century, comes from Latin Dignitas (worthiness) by way of French dignité. It aligned much closer with someone’s “merit.” If someone was “dignified,” it meant they had a high status.

There are a number of competing conceptions of human dignity taking their meaning from the cosmological, anthropological, or political context in which human dignity is used. Human dignity can denote the special elevation of the human species, the special potentiality associated with rational humanity, or the basic entitlements of each individual.  There are, by extension, dramatically different normative uses to which the concept can be put. It is connected, variously, to ideas of sanctity, autonomy, personhood, flourishing, and self-respect, and human dignity produces, at different times, strict prohibitions and empowerment of the individual. It can also, potentially, be used to express the core commitments of liberal political philosophy as well as precisely those duty-based obligations to self and others that communitarian philosophers consider to be systematically neglected by liberal political philosophy.

The original meaning of the word “dignity” established that someone deserved respect because of their status. In the Universal Declaration of Human Rights, that concept was turned on its head. Article 1 states: “All human beings are born free and equal in dignity and rights.” Suddenly, dignity wasn’t something that people earned because of their class, race, or another advantage. It is something all humans are born with. Simply by being human, all people deserve respect. Human rights naturally spring from that dignity.

English-speakers often use the word “dignity” in proscriptive and cautionary ways: for example, in politics, it can be used to critique the treatment of oppressed and vulnerable groups and peoples, but it has also been applied to cultures and sub-cultures, to religious beliefs and ideals, and even to animals used for food or research.

“Dignity” also has descriptive meanings pertaining to the worth of human beings. In general, the term has various functions and meanings depending on how the term is used and on the context. In ordinary modern usage, the word denotes “respect” and “status”, and it is often used to suggest that someone is not receiving a proper degree of respect, or even that they are failing to treat themselves with proper self-respect. There is also a long history of special philosophical use of this term.

However, it is rarely defined outright in political, legal, and scientific discussions. International proclamations have thus far left dignity undefined, and scientific commentators, such as those arguing against genetic research and algeny, cite dignity as a reason but are ambiguous about its application

As a consequence of these antagonistic currents of thought, philosophical analysis of human dignity cannot be separated from wider debates in moral, political, and legal philosophy. Nor can a certain level of selective reconstruction be avoided. The genealogy of the concept has been traced, tendentiously, through the whole history of Western, and sometimes non-Western, philosophical thought; such genealogies are not always illuminating at a conceptual level. More specifically, it is a desideratum of a philosophical analysis of human dignity that the concept can be shown to have sufficient clarity to make a useful contribution to modern philosophical debate.

The International Covenant on Civil and Political Rights, adopted in 1966, continued this understanding. The preamble reads that “…these rights derive from the inherent dignity of the human person.” This belief goes hand in hand with the universality of human rights. In the past, only people made dignified by their status were given respect and rights. By redefining dignity as something inherent to everyone, it also establishes universal rights.

Human dignity can be violated in multiple ways. The main categories of violations are: Humiliation, Instrumentalization or objectification, Degradation, and Dehumanization. The concept of human dignity isn’t limited to human rights. In fact, for centuries, religions around the world have recognized a form of human dignity as we now understand it. Most (if not all) religions teach that humans are essentially equal for one reason or another.

In Christianity, Islam, and Judaism, it’s because humans were created in the image of God, becoming children of God. Dignity is something that a divine being gives to people. In Catholic social teaching, the phrase “Human Dignity” is used specifically to support the church’s belief that every human life is sacred. This defines the denomination’s dedication to social issues like ending the death penalty. In the 20th century, dignity became an issue for physicians and medical researchers. It has been invoked in questions of the bioethics of human genetic engineering, human cloning, and end-of-life care (particularly in such situations as the Terri Schiavo case, a controversial situation in which life support was withdrawn from a woman diagnosed in a persistent vegetative state).