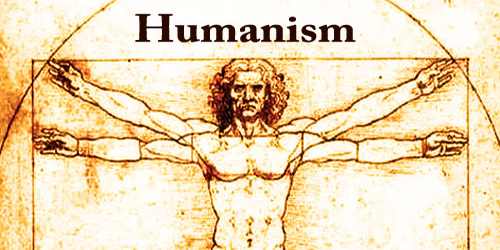 Humanism is a rational philosophy informed by science, inspired by art, and motivated by compassion. Affirming the dignity of each human being, it supports the maximization of individual liberty and opportunity consonant with social and planetary responsibility. It advocates the extension of participatory democracy and the expansion of the open society, standing for human rights and social justice.

The meaning of the term ‘humanism’ has fluctuated according to the successive intellectual movements which have identified with it. Generally, however, humanism refers to a perspective that affirms some notion of human freedom and progress. It views humans as solely responsible for the promotion and development of individuals and emphasizes a concern for humans in relation to the world.

In modern times, humanist movements are typically non-religious movements aligned with secularism, and today humanism may refer to a nontheistic life stance centered on human agency and looking to science rather than revelation from a supernatural source to understand the world.

Humanism, a system of education and mode of inquiry that originated in northern Italy during the 13th and 14th centuries and later spread through continental Europe and England. The term is alternatively applied to a variety of Western beliefs, methods, and philosophies that place central emphasis on the human realm. Also known as Renaissance humanism, the historical program was so broadly and profoundly influential that it is one of the chief reasons why the Renaissance is viewed as a distinct historical period. Indeed, though the word Renaissance is of more recent coinage, the fundamental idea of that period as one of renewal and reawakening is humanistic in origin. But humanism sought its own philosophical bases in far earlier times and, moreover, continued to exert some of its power long after the end of the Renaissance.

It is a democratic and ethical life stance which affirms that human beings have the right and responsibility to give meaning and shape to their own lives. It stands for the building of a more humane society through an ethics based on human and other natural values in a spirit of reason and free inquiry through human capabilities. It is not theistic, and it does not accept supernatural views of reality.

Humanists believe that this is the only life of which we have certain knowledge and that we owe it to ourselves and others to make it the best life possible for ourselves and all with whom we share this fragile planet. A belief that when people are free to think for themselves, using reason and knowledge as their tools, they are best able to solve this world’s problems. An appreciation of the art, literature, music, and crafts that are our heritage from the past and of the creativity that, if nourished, can continuously enrich our lives. Humanism is, in sum, a philosophy of those in love with life. Humanists take responsibility for their own lives and relish the adventure of being part of new discoveries, seeking new knowledge, exploring new options. Instead of finding solace in prefabricated answers to the great questions of life, humanists enjoy the open-endedness of a quest and the freedom of discovery that this entails.

The word “humanism” is ultimately derived from the Latin concept humanitas. It entered English in the nineteenth century. However, historians agree that the concept predates the label invented to describe it, encompassing the various meanings ascribed to humanitas, which included both benevolence toward one’s fellow humans and the values imparted by bonae litterae or humane learning (literally “good letters”).

Those who have spoken Latin and have used the language correctly do not give to the word humanitas the meaning which it is commonly thought to have, namely, what the Greeks call φιλανθρωπία (philanthropy), signifying a kind of friendly spirit and good-feeling towards all men without distinction; but they gave to humanitas the force of the Greek παιδεία (paideia); that is, what we call eruditionem institutionemque in bonas artes, or “education and training in the liberal arts”. Those who earnestly desire and seek after these are most highly humanized. For the desire to pursue of that kind of knowledge, and the training is given by it, has been granted to humanity alone of all the animals, and for that reason, it is termed humanitas, or “humanity”.

It was first employed (as humanismus) by 19th-century German scholars to designate the Renaissance emphasis on classical studies in education. These studies were pursued and endorsed by educators known, as early as the late 15th century, as umanisti that is, professors or students of Classical literature. The word umanisti derives from the studia humanitatis, a course of Classical studies that, in the early 15th century, consisted of grammar, poetry, rhetoric, history, and moral philosophy. The studia humanitatis were held to be the equivalent of the Greek paideia. Their name was itself based on the Roman statesman Marcus Tullius Cicero’s concept of humanitas, an educational and political ideal that was the intellectual basis of the entire movement. Renaissance humanism in all its forms defined itself in its straining toward this ideal. No discussion of humanism, therefore, can have validity without an understanding of humanitas.

The first Humanist Manifesto was issued by a conference held at the University of Chicago in 1933. Signatories included the philosopher John Dewey, but the majority were ministers (chiefly Unitarian) and theologians. They identified humanism as an ideology that espouses reason, ethics, and social and economic justice, and they called for science to replace dogma and the supernatural as the basis of morality and decision-making.