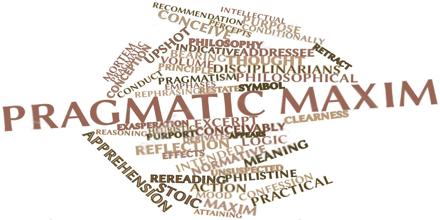 Pragmatic Maxim is originally intended to convey, at least in Peirce’s earliest statements, and to briefly discuss some of the consequences of this maxim for philosophical method. It is actually a family of principles, not all equivalent at least on the surface.It  also known as the maxim of pragmatism or the maxim of pragmaticism, is a maxim of logic formulated by Charles Sanders Peirce. It appears, then, that the rule for attaining the third grade of clearness of apprehension is as follows: Consider what effects, that might conceivably have practical bearings, we conceive the object of our conception to have.