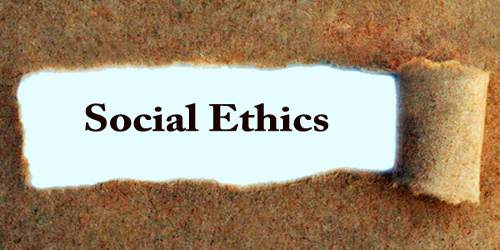 Social Ethics is the collection of values and behaviors of a given culture or people group. It is a blend of different aspects of how society(s) are structured and managed by their participants. These levels and scales are important as the intent is to minimize overall harm or damage to society and its members.

Human activities in space present us with novel philosophical, cultural, and ethical challenges. Moreover, space acts as a different lens through which we can explore many of our oldest and deepest social and philosophical issues. Indeed, the broad issue of whether significant resources should be devoted to space activities at all can be considered a social ethics question. Many people suggest that resources devoted to space activities detract from solving problems on Earth that desperately need more attention. Others counter that space activities can help address those problems. This broad question can have direct relevance to the motivations for space activities because the answer could determine the extent to which space will be used primarily to address Earth-based problems directly as opposed to exploratory pursuits that may or may not have direct terrestrial relevance.

Misunderstanding in the interactions of humans within/among/between differing expectations can result in a range of harms; psychological and even physical- occasionally resulting in violent death(s).

Manners are when shared/properly communicated and defined, what keep folks from offending others unintentionally in daily interactions both public and private and try to prevent subsequent ‘harm’. Essential minimums of Please, Thank you, Excuse me, etc., cover many matters of the interactive sort.

Social ethics is not an option, it is the only option when by the ethical judgment one means to refer to decisions, whether individual or collective, affecting real (as opposed to ideal) common goods. Or, come at from the other angle: The world today is postcolonial. In the absence of a well-organized colonial system, the cultural accords by which the very idea of foundational goods, and truths, advanced the forward progress of modernity are left to defend themselves.

Without the effective enforcement of, say, the entrepreneurs of the Dutch East India Company in the 17th century, the British administrators in the 19th, or the American pilots in the 20th, the prospect of One World falters before the different tastes of customers and other subjects who are more likely to take their ethical leads from the sources they relied upon before the rise of the West: from the faiths of their mothers and fathers.

Ethics is just that an intellectual discourse on whether and action is ethical or not. It doesn’t matter whether it is society or the individual undertaking the action. If one considers the ethical principle of justice then the problem may be looked at from a couple of perspectives a) how society treats the individual or b) how the individual treats society.

The social ethics of any society cannot be our ultimate guide. Whether humans are naturally evil or good is a question they both derived from a classical philosophical culture in which Being was, at worst, doubted or, more commonly, merely respected, but certainly not avowed. Without Being, History must pay the piper. Its promise that inequality will be overcome in the temporal future when those who are well behaved are admitted to the this-worldly kingdom of the good must eventually come to pass, at least to a statistically significant extent. When, as today, the difference between the good and the poor, measured in real social and economic terms, is greater, not lesser (as it had been promised), then this line of social logic fails for all except the privileged, whose day is yet to come.

Social ethics, today, must be ethics that accounts for social death. Whenever power and differences are hidden behind the good and the true, nothing is good, and death is the final truth. The last systematic, modernist ethical work was Paul Tillich’s “The Courage To Be” in which he set the ideal of being on its head. Ethical courage, he said, is the courage to be, but being, he continued, is anxiety ‘‘experienced as one’s own finitude.’’ Death, including social death, is that one occurrence in a person’s here and now during which the solitary individual experiences the only purely Durkheimian social fact: that the social is born upon the finitude of the isolated individual. Conversely, as Durkheim also taught in Elementary Forms of the Religious Life, the social, though deadly, is the only prospect whereby the true or the good can possibly tame the powerful.

Social ethics amounts to how society determines the values that operate as the objective moral law within that society. Ironically, any statement regarding right and wrong to include those denying their existence essentially operate as objective truth within a society that embraces it. This world is not our home. While we live here, we should do whatever possible to honor the ethics of the region where we abide, if that’s what it takes to reach others with the gospel.