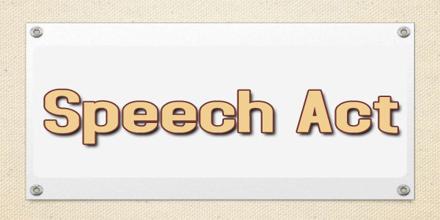 This article talks about Speech Act, which may be performed by a speaker in making an utterance, as stating, asking, requesting, advising, warning, or persuading, considered in terms of the content of the message, the intention of the speaker, and the effect on the listener. It is really the performance of several acts at once, distinguished by different aspects of the speaker’s intention: there is the act of saying something, what one does in saying it, such as requesting or promising, and how one is trying to affect one’s audience.”  Speech acts have an effect on the feelings, thoughts or actions of either the speaker or the listener.