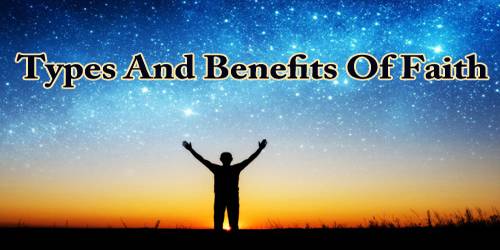 Types And Benefits Of Faith

The English word “faith” can be explained in many ways. It is thought to date from 1200–1250, from the Middle English Feith, via Anglo-French fed, Old French feid, feit from Latin fidem, accusative of fidēs (trust), akin to fīdere (to trust). The meaning of faith is different according to the uses of the word. In a simple concept, we know faith as confidence or belief, which can be on anyone or anything.

In the context of religion, one can define faith as “belief in God or in the doctrines or teachings of religion”. Religious people often think of faith as confidence based on a perceived degree of warrant, while others who are more skeptical of religion tend to think of faith as simply belief without evidence.

Nowadays, there are various types of faith and belief in the world. Many religions and non-religious people also have faith and trust in someone. The trust and faith is an idea of believing to anyone without seeing that.

Blind Faith: The term of blind faith used when someone believes with no reason and evidence and any logic. There are some reasons on the side but not having any base of that. This is a traditional faith that people follow.

For example, if someone says that this doctor is right, then others will believe in their statement without checking and with no reason. Mostly in blind faith, it happens, and people follow blindly.

We observe this blind faith in the religious field. If any spiritual leader explains anything to their follower with no philosophy and reason, their followers will trust and trusts him blindly. If anybody raises the cross-question against him, they become an enemy of that person. So it is called that blind faith is perilous.

We usually see that a person killed someone or his kids as a sacrifice before the idol goddess on the advice of any priest. This is because he has faith in that person blindly. Here, they not used their mind and logic.

Religious Faith: We relate this faith and belief to any religion. In this faith, people of a particular religion have faith in their system of religion and its natural or supernatural power. This is a spiritual belief of this faith. There is a unique type of religion in the world. Followers of this religion follow their system and believe in God and its power.

In religious belief, people follow the rules because they have faith. For example, Christians wear the cross symbol mostly because of having faith in it. In Islam, also people use a cap or cover his head during the prayer and having a beard. Women used to wear a unique dress to cover the complete body as they believe in the ruling of a religious system.

The population of having faith in religion in the world is increasing fast. In this futuristic time, we will find a vast number of people who follow Christianity and Islam in the world. In religious faith and belief, people of that religion accept the spiritual and supernatural power. They believe in the holy books of those religions.

Faith brings salvation. Whosever believes in Him has eternal life, and shall not come into judgment, but has passed from death to life. The just shall live by faith.

Faith, whether it is religious faith or blind faith, it has some common positive characteristics which provide the right thing and guidance to the followers.

Increase Unity: If some people or groups of people having faith in anything, then their unity increases. They collect at a place on a particular time for any meeting, spiritual conference, and teaching classes.

They discuss together and solve the issues related to their belief and their group or community. So we can see it that unity increases the unity between the people.

Increase Hope: Hope increases the hope is the key to faith. If faith has its existence, then the hope exists there. Without hope, faith is not valid and meaningless. Followers or believers accept the rules and religious cultures because they see a glimpse of hope it.

Hope is there in many faiths. In blind also people keep their promise. In religion, also people have great faith for their wishes and betterment of the world and humanity.

Faith brings all the benefits of salvation into our lives. This includes healing, prosperity, peace, love, joy, deliverance from demons and the curse, sanctification of the mind and emotions (the salvation of the soul) and any other benefit which the word of God promises to us.